Behind every good brand is a great Art Director. Everything the brand puts out goes through the art director who creates the visual identity. Behind the scenes takes a look at the work of the art director of the some of the most cutting edge and exciting brands.
For this issue we talked to Scott Tepper and Keith Hufnagel as they´re supposed to be the masterminds behind nowadays faster than ever growing company HUF. They´re able to not just do likable products or buy in the best skateboarders to testimonialiseize a their logo. Furthermore they know how to connect different kinds of lifestyle, art, fashion and of course skateboarding. We took our chance to get a view behind the curtain. 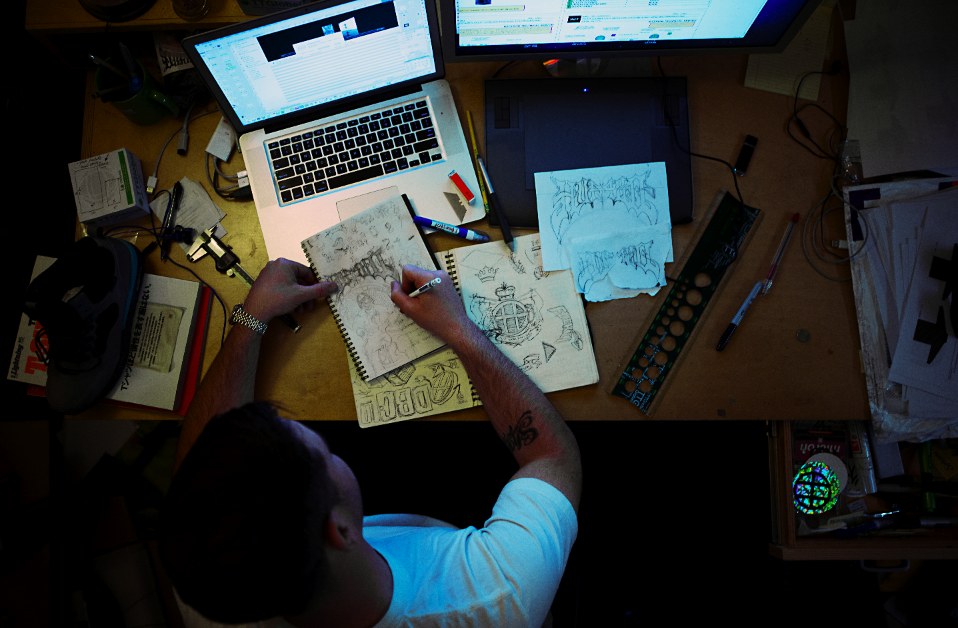 Hi Scott, what is your background? How did you get into graphic design?

As far back as I can remember I was always drawing and painting. While growing up in New Jersey, I was exposed to art and design from a very young age by my father, who was himself an Art Director for Avon Books. Early on my dad would take me to work with him in NYC and I guess that is when I realized a living could be made doing what I loved: drawing. This was also around the time I would be exposed to graffiti on the subway cars and was instantly hooked. Some of my earliest drawings were of B-Boys and Subway cars. I began actually writing graffiti around 9 years old. Between my father’s creative support and graffiti, I’d say those are the two things that guided me into my career.

Did you study or is everything DIY-style?

Both, kind of…
Both my parents passed away early on and money for school was not available to me. I managed to get an in-house freelance job at Ecko Unltd., and it was there that I’d ask a lot of questions to my fellow designers, usually regarding the computer. This was my first real creative job.
I could not afford school so I used to sneak into FIT and sit in on classes. I would have to bullshit the professors to not kick me out since I was not on the class roster or paying for class. I guess you can say I stole some of my education.
After Ecko I moved on to Akademiks where I would take the apparel tech packs home and study them to learn how to design apparel and properly tech pack my designs to get made. I guess it was very DIY now that I reflect on it.

How did you get into skateboarding?

Skating in my town, while I was growing up, was not mainstream like it is today at all. So naturally I was attracted to it. I looked up to the older guys who skated and wrote graffiti. Fortunately, they accepted me and taught me a lot of shit, for better or worse. 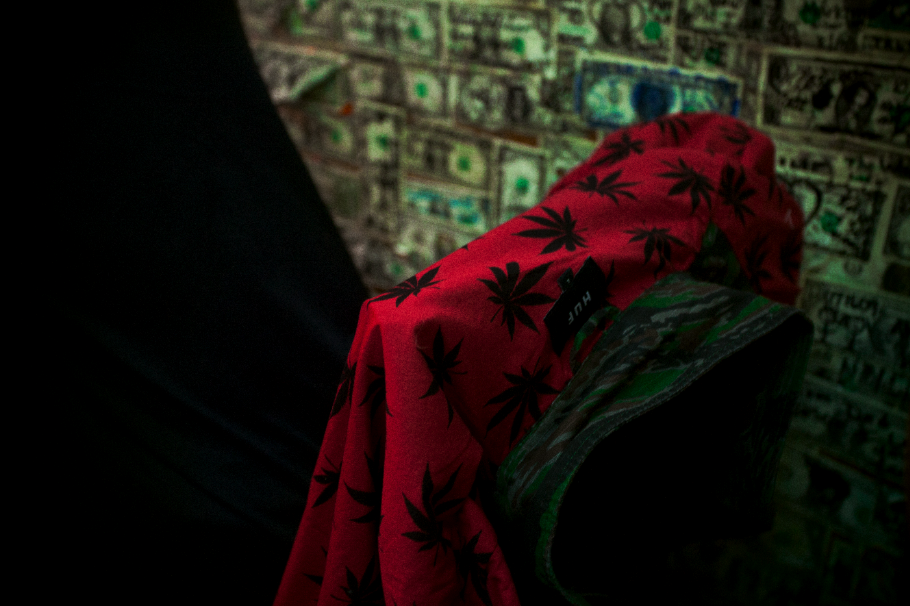 Do you remember the first board you ever got?

My Dad (R.I.P.), my friends, graffiti, vintage design annuals from the 60’s & 70’s, antique furniture/woodworking, handmade craftsmanship… pretty much anything I see intelligence in that inspires me to design better and smarter, and overall to be more clever.

When and how did you get involved within the skateboard industry?

I guess 2006’ish when I moved to California. New York City did not have many avenues that were purely skate. California definitely has more opportunity for someone with my skill set who desires that sort of freedom a company in this industry can provide.

When and how did you get involved with HUF?

I was actually leaving another job and had all intentions of launching a creative agency with some other friends. I had turned down a bunch of offers elsewhere in the industry, but said to myself, if HUF had a good offer, I would stick around and work with them.
They gave me an offer which included creative freedom and an opportunity to help elevate the brand. I could not pass that up. The brand has too much potential.

What is your official job title now?

How would you describe the visual philosophy for HUF?

What type of stuff do you like design the most? Shoes or shirts?

All of it. Literally. But I have a deep love for Typography so any chance I get to flex there I jump at the opportunity. 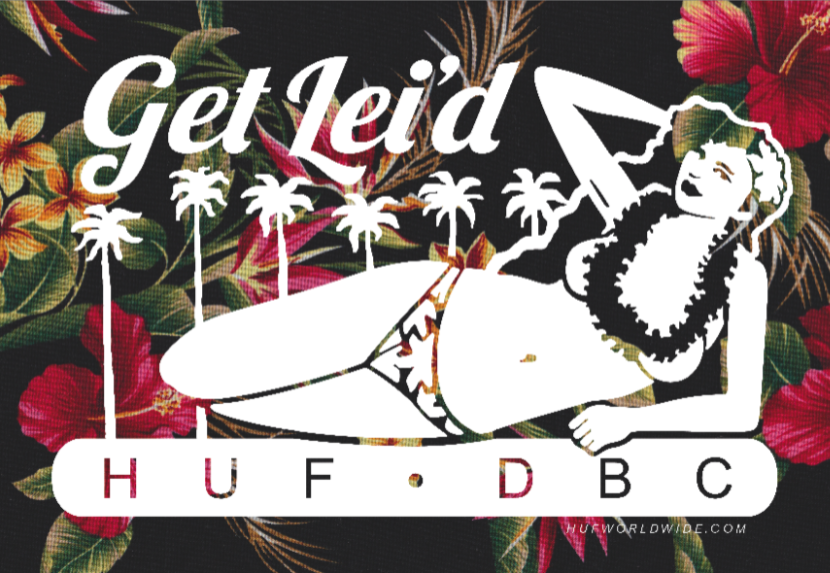 Which of your work would you say is your personal favorite so far?

It is all rewarding when it comes to fruition, but the two booths I did for the Agenda Tradeshow were a lot of fun. One was a NYC Bodega theme with canned goods and a sock vending machine. The next one was an LA Swap Meet theme equipped with an embroidery machine, a ghetto jewelry store and a martial arts supply store facade. I take up any opportunity to get off the computer and work with my hands.

Describe a usual day at the office, while approaching up on a deadline.

Everyday is a deadline…

How much of a free hand do you have in making decisions? Does your work gets checked off by a bunch of people before actually going into print/ production?

One of the reasons I love HUF is that Keith and the brand as a whole trusts me to make the right decisions. I have worked places with a ton of red tape and because of it nothing gets accomplished. That being said I make sure Keith and I have a clear line of communication at all times and that his vision for the brand is being upheld.

Are you in touch with all the team riders to gain their input, or do you propose your idea’s to them?

Yeah absolutely, as much as I can be. They live all over the country so I rely heavily on our team manager Tyler Cichy to keep me up to date with them all. Ultimately I want to help them build their brands and especially do so with HUF so I am always looking for their input. It is very important to us.

In the end, does Keith always have the last word?

100%. Every decision I make or thing I design, I have Keith and the brand that bears his name in mind. Keith has a strong vision for the brand and I am here to make sure that vision becomes a reality.

What makes you happy? 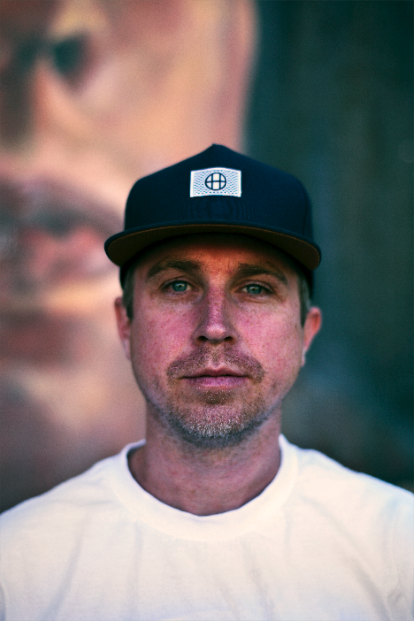 Hi Keith, you have been one of the pioneers to connect skateboarding to streetwear and sneaker fashion. Did you know ten years ago that the connection will be so huge now?

Ha! Never!!! I really just started out doing things that I liked and was always into. Being from NYC I have always been into streetwear, footwear, and skateboarding so it all just came about very natural. I think there is some sort of interrelated connection that runs throughout all three, being that they are all born of the streets. As a skateboarder always out on the streets, you’re going to tend to adopt and take influence from all the elements that you are surrounded by. I think music and art play a huge role in weaving the three together as well.

How important is this connection nowadays?

This connection is extremely important. I think this is the reason that there is even a company in existence called HUF today. All of these elements came together at the right place and the right time, and is what really brought this brand to life. Contemporary culture has been slowly progressing into an age of more and more amalgamation, collaboration, collage… The boundaries between all of these cultural mediums continues to blur into one another, so I think we will continue to see an increase in crossover/influence between skateboarding, music, art, photography, streetwear, sneakers, etc…

Hmm…well taken out of context it is a bit hard to define, haha, but it is in line with the idea I was describing above in which these street-based countercultures tend to feed off each other, working in a mutual interdependency in order to shape one another. I think there is much more in common than we sometimes think between something like skateboarding, art, music, etc., in that it all revolves around artistic expression and the way an individual chooses to express that creativity. These different mediums tend to work off each other in a very parallel progression.

In your opinion, who are the most important influencers in skateboarding today?

Wow, there are so many skateboarders today it gets hard to keep track. I still really think Mark Gonzales is the biggest influence to this day. He is a great example of what I describe above, in that he has always pushed the creative limits when it comes to skateboarding and art, and continually blurs that distinction between these cultures. He takes elements from art, music, skateboarding, graffiti, fashion, poetry, and whatever the hell else he wants and just blends them all into this amazing thing that is his own. The way he skates is like jazz: improv, inventive, and always a surprise.
Two others I’d have to mention as major influences on the way we see skateboarding today are also Guy Mariano and Lance Mountain. These guys have been killing it for 2 decades and still continue to do so.

Who are your Top 3 skateboarders at the moment?

Which are your Top 3 companies at the moment?

What´s your trend forecast for the next years? Where is skateboarding going? More super-commercial-tv-event-shows or back to the roots?

Shit, it’s sad to say but a lot of skateboarding has been going corporate. All these massive corporations are trying to claim a stake in skateboarding and have their own piece of it in their history. It’s often hard if you’re a struggling skateboarder or small brand to resist, as sometimes it is either sign on or go under. There has definitely been an explosion of money into skateboarding in recent years that we have never seen before, which is always hard to predict. We’ve seen this happen in waves before, where these corporations that are only interested in quick money pull out without a second thought the second they start losing profits…which completely fucks over actual skateboarders. I feel like the underground will always be there, but it may never be the same after how mainstream skateboarding has become. The corporations have penetrated and now everything has changed. Some for the better and some for the worse. So yes, its going big big big. Street League. ESPN. Skateboarding will always be cool… it’s skateboarding. But the future brings more and more corpo dollars into it. The roots will always be there and hopefully a young skateboarder just does it because he loves it and not because you can now earn half a million dollars on Street League. Trends for Streetwear… It’s coming back full circle into the early 2000s. Get ready for more all-over, repeat patterns, but done in a classier way, haha.

What´s your favourite thing about skateboarding for life?

The freedom to do whatever you want. Skateboarding has always been more of an art than a sport to me. It will always provide a way to creatively express yourself.

All Photos by Huf.