When we came up with the idea to make an issue about the different approaches of how to portray or depict a person’s identity and character, we thought about the possibility of psychoanalysis early on. More precisely, we considered the method of personality tests seemed to be an interesting field for our concerns.

A person who, on the one hand, is primarily specialized in analyzing people, but on the other unfamiliar with our subject and the world of skateboarding, would probably offer a whole different perspective on a person’s character than interviews usually tend to do.

To lessen the ease of the task a bit, we chose a test person with a very unique appearing character: Giorgi Balkhamishvili. I have personally known Giorgi for a very long time now. We grew up together – I can only barely remember the times before we entered one another’s lives, and we always have remained very close friends. I would argue that Giorgi has a character that is very complex and thus hard to read, especially for someone not knowing him. Even today, although I have known him for so many years and am prepared for every unthinkable quirk of Giorgi’s infamous “five minutes,” he still manages to surprise me from time to time, causing me to ask myself once again if I really know him as well as I think I do. The funny thing is, I always have the feeling that Giorgi secretly enjoys these moments when his actions confuse people, particularly his close friends. Having said this, I was really curious about what this whole experiment would result in. I was interested in how the questions would look like and how precisely one would be able to draw conclusions from the answers.

The personality test we used contained 100 questions that one had to answer with one out of five levels of accuracy, from very accurate to very inaccurate. The questions all followed a similar pattern – They were rather short and aimed at deciphering, or revealing, different character traits: “Do you seldom daydream?” “When you hang out with a group of people, are you bothered by at least one of them?” “Do you know how to get around the rules?” “Do you have a dark outlook on the future?” On top, there were some cognitive ability questions included as well: “Miriam and Adam went fly fishing and caught 32 salmons. Miriam got three times more than Adam. How many did Adam get?” Due to the fact that the test was kind of more a self-assessment, the psychologist included a personal interview at the very beginning in order to get some background information on what sort of context Giorgi’s later answers would be based on. The whole procedure took about three hours and Giorgi patiently answered each question truthfully.

From my point of view, the result was amazingly close to what my own impression of Giorgi is. Moreover, which was less surprising for me than for the analyst, Giorgi’s personality results indeed ended up differing quite a bit from the so-called “average” person. But no worries, at the end of the session, he was allowed to leave the building without subjected to a white straightjacket! 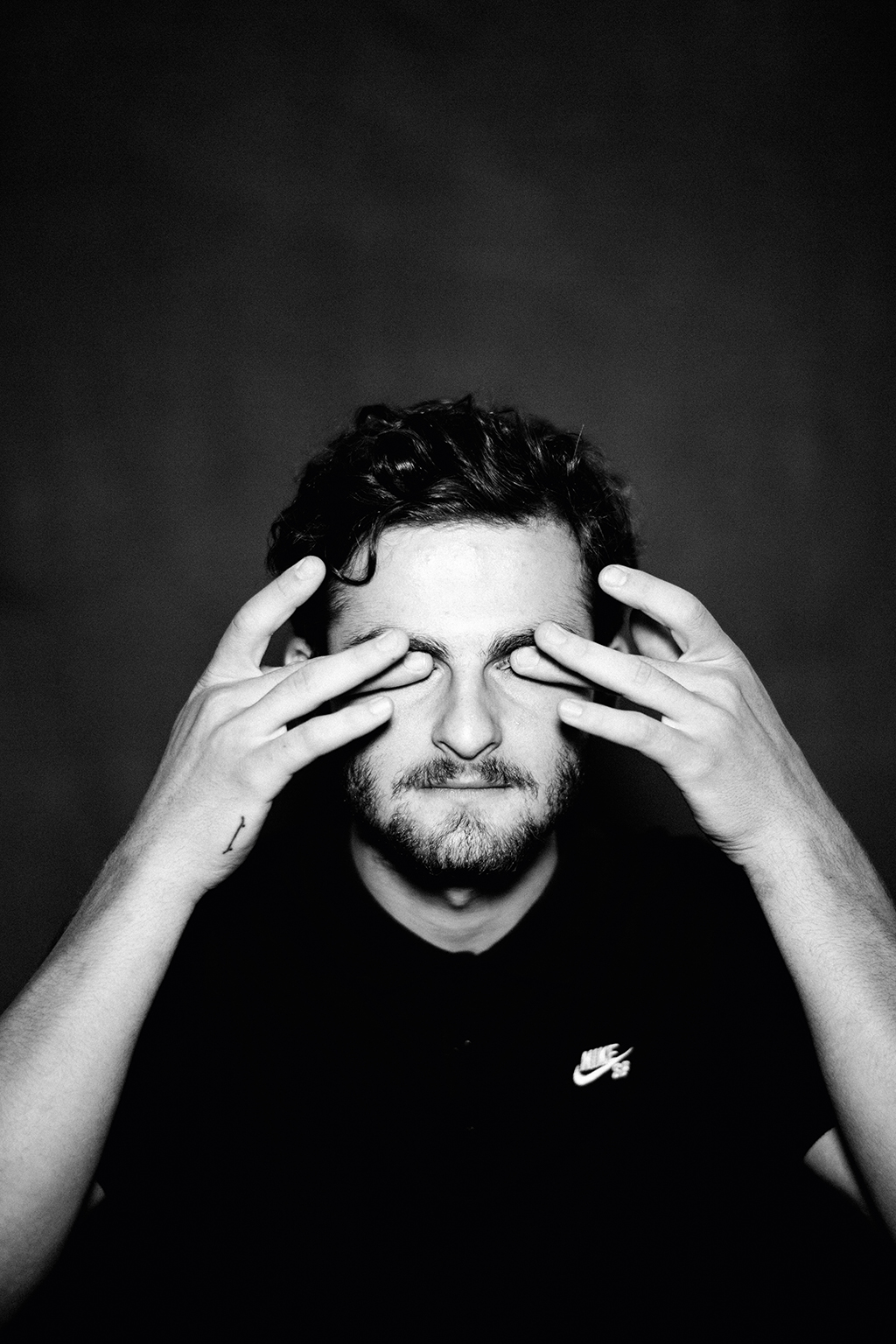 I first met Giorgi Balkhamishvili on the 29th of May, in Berlin. It was a lazy Sunday afternoon and countless amounts of pollen were wafting from tree to tree, declaring the end of Spring just as I arrived to the place where we would meet.

Giorgi told me he moved from Georgia to Berlin with his parents when he was only six months old. Growing up un a creative environment (both his parents are artists) and with the streets of Berlin as a background, he discovered skateboarding at the age of twelve. Although both his arms were bruised when we met, he described skating as a weightless feeling of endless possibilities. He was sure to let me know, before making a jump, he sometimes taps three times on the ground with his skateboard to prevent him from falling too hard. Giorgi also told me about how he does not drink alcohol, but that one time he drank four liters of beer in one night just to win a bet. Most interestingly, Giorgi admitted that he likes to play with the idea of being in prison – a curious desire for someone who has never even committed a felony… At least, as of yet. One might wonder what character could be behind such thoughts. In the following section, I will attempt to capture a glimpse of Giorgi’s personality. 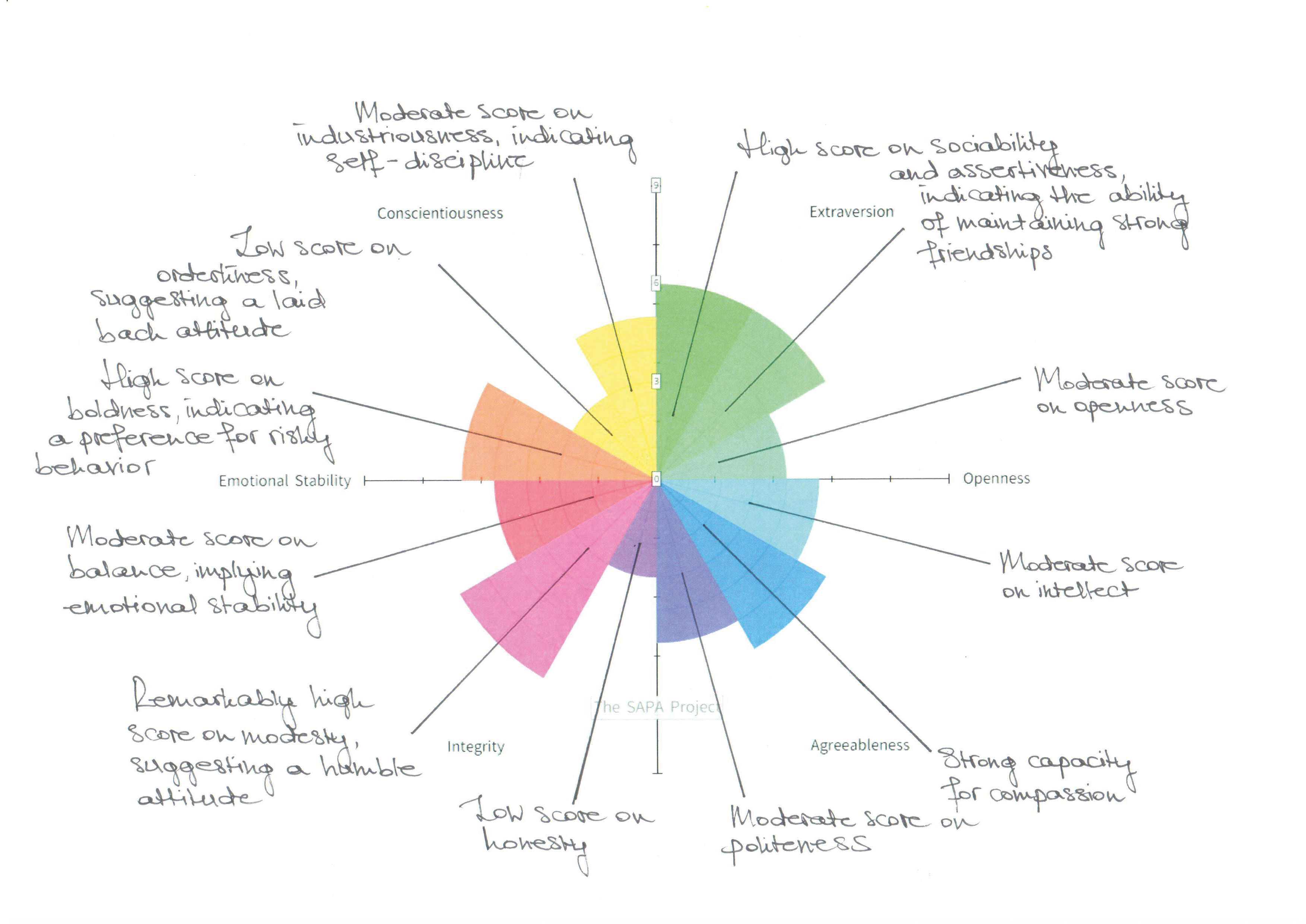 To assess Giorgi’s personality, I used an online personality test. Just as most personality tests, it focuses on the basic dimensions of one’s personality, such as extraversion, honesty, and emotional stability. Although a personality test is never flawless, this semi-scientific inventory is designed to be objective. Hence, the results may not necessarily be flattering to whom the data concerns. What secrets could it reveal about Giorgi’s personality?
First of all, the test indicated that he possesses some very admirable character traits. His results show that he scored exceedingly high on modesty. This means his personality bestows him with a humble attitude, both toward others and toward his own accomplishments. In addition, Giorgi scored high on compassion. Compassion is characterized by the ability to recognize the emotions of others. The result suggested that he might be sensitive to social conflicts that exist in his surroundings. Giorgi’s results also indicated that he has a strong capacity to feel sympathy for others.

Another interesting hint we may take from the test results concerns the fact that Giorgi scored curiously low on honesty. This indicates that he might be prone to mislead others, especially those who represent considerable authority. This also suggests that he tends to be less troubled by rule-breaking behavior. He might also be considered more creative, since he is less concerned with following established rules. Giorgi also scored particularly low in the realm of conscientiousness. His results implied that he has a tendency to live in the moment and to act on what feels good. He does not pay much attention to detail and probably has a laid back attitude in general. As a result, some might perceive him as a little careless, maybe even disorganized.
Lastly, Giorgi scored remarkably high on boldness. Boldness represents the ability to face uncertain or even threatening situations with confidence. His results suggested that he is able to face uncertain circumstances with emotional stability. Some emotionally stable individuals may go as far seeking out thrilling situations, because they perceive these situations to be less threatening than most people.

To conclude, I would say Giorgi has a creative personality that tends to avoid rules, but one that yearns to take risks. His character consists of qualities that seem to be ever in search of the next jump, the next thrilling moment, before looping back touching solid ground again.

The test that was used for this article is part of the online SAPA Project, initiated by William Revelle (Northwestern University, Illinois). The test can be found on www.sapa-project.org 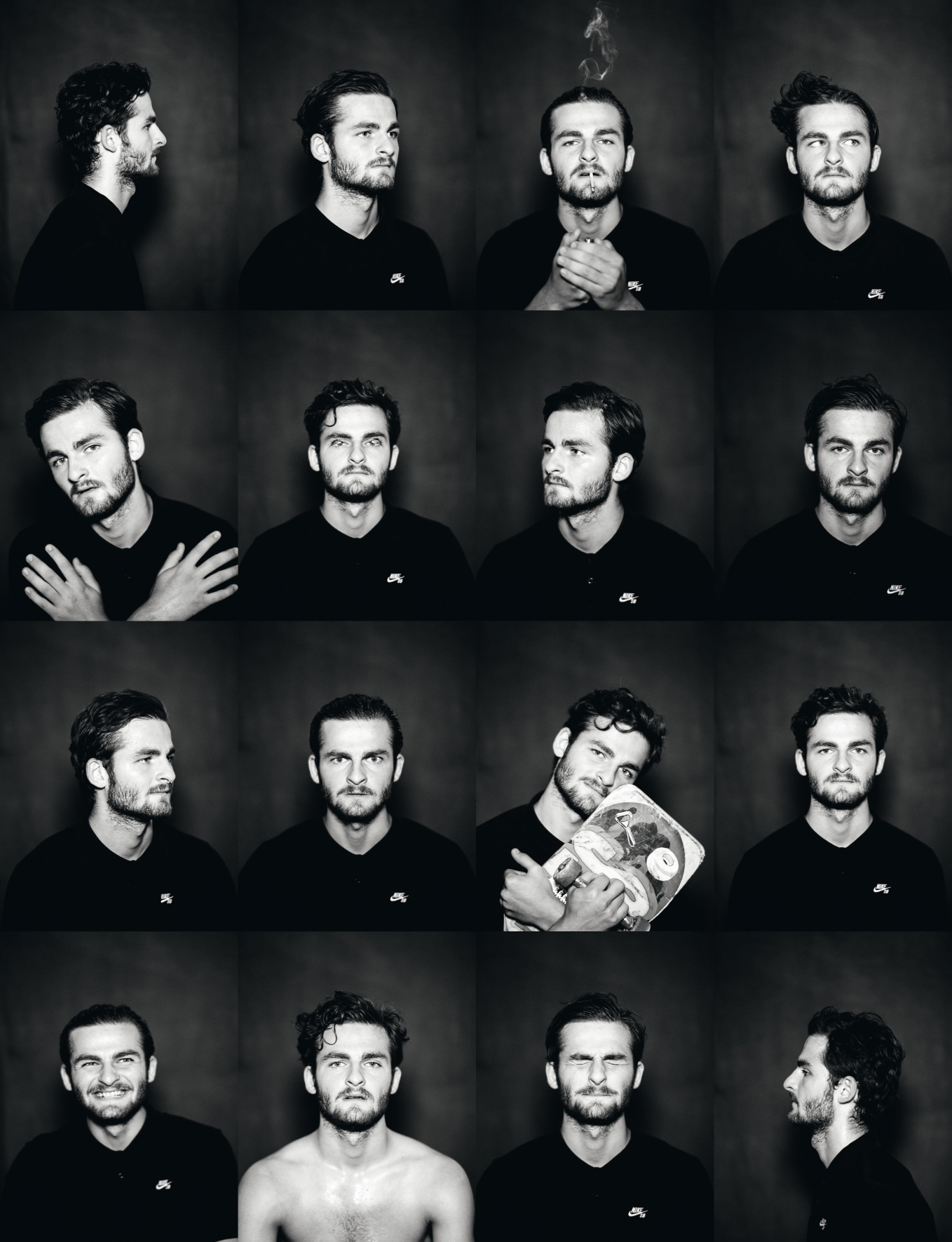 The test was quite intense. I had to think about questions that I usually wouldn’t have bothered myself with. In the end, I had the feeling that my hair had turned grey. Ain’t shocking. – Giorgi Armani