Nike SB just launched the brand new Dunk Low Pro “Ishod Wair” shoe. While the Bright exhibition is taking place in Berlin I used the chance to met up with Ishod for a little interview. The initial nervousness quickly vanished because Ishod is far away from having his head in the clouds and instead is a very grounded person who is not taking himself all too serious, however, this dude is one of the sickest skateboarders that ever put their feet on this earth. While he was setting up a new board, he casually answered my questions with a wisp of a loose and slangy tongue.

You check your phone quite often. Are you busy or do you just use Tinder?

Nah man, I use Wire. It is kind of like Tinder but it is based more through Instagram I guess. And it is like sick dude. I haven’t used Tinder for like two years. I wasn’t really a Tinder guy but I just got this app cuz I downloaded it a while ago and somebody said: “Dude, that shit is tight.” So I typed all my shit in and used it everyday since. I did not got any results yet but all the girls seem to be really nice and if they’re talking to me – you know – it’s cool and entertaining. You know what I mean?

What is something people don’t know about you or maybe something they wouldn’t expect?

Oh, ehm. I don’t know. I’m not good in those kind of speed dating questions I guess. Bitches would be skippin’ me like “okay we don’t need to know you – Skip”. (Laughs) I feel like I’m more complex than people normally think of me. They’re like “this dude is just a skate rat and nothing more”. But I feel like I’m actually a more conservative person that don’t wanna put himself too much outside. You know to me it’s kinda weird to know all those people out there knowing me and shit. I feel like I am really low-key.
I remember something that really pissed me off when I was younger. Now people start to know that I like cars and shit. But when I was younger – I was maybe like 20 – I’ve done my license and when I talked about it people were like “Dude, you got a license?” and I just like “Yeah dude, I’m not a retard! What the fuck? Why should I not be able to fuckin’ drive? I am a fucking perfectly functional 20-year old man. Man, what’s up?!” And that happened a bunch of time and that just really puzzled me. You know I mean I did not go to all of my school and wouldn’t say that I’m the sharpest dude out there, but I’m far from being a dumbass. 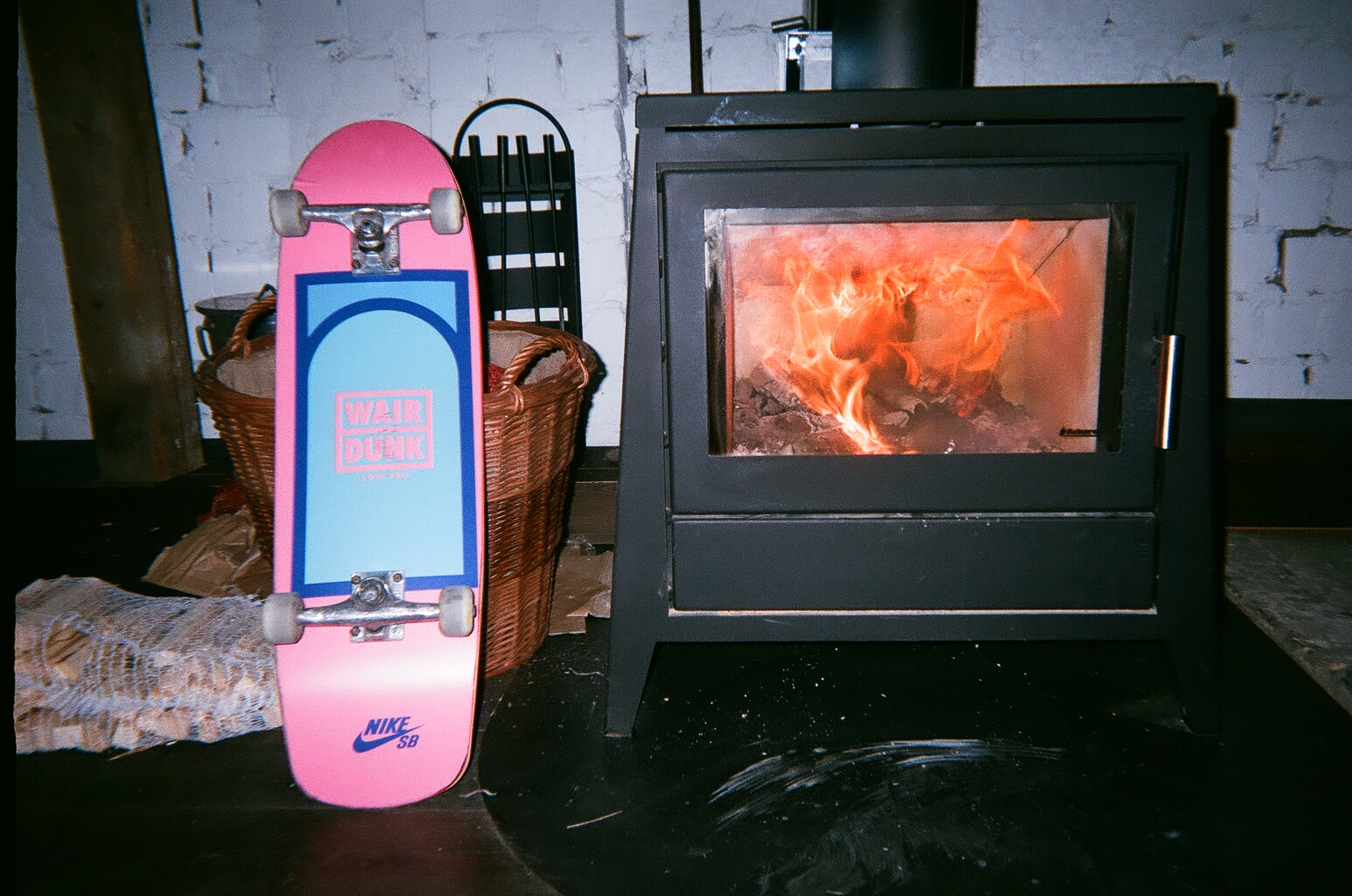 Tell me something about the process of developing your new shoe.

It was more the thing that I was telling them a bunch of time to slim down the dunk and they finally were willing to do this. I wasn’t expecting them to be like “Hey this is your new shoe” I just thought that they gonna slim it up and me being like “Sick this is a perfect Dunk now”. It just kinda turned on me in the best way possible. I was like “Shit this would be tight” and then I was like “What? Shit is dope! Cheers!” (Laughs)

I heard rumors that you skate at least eight or more hours a day. Is there a jot of truth in it?

I like to skate as much as I can. If I’m at home and I’ve like eight hours that are free then hell yeah I fuckin’ skate eight hours a day but if it is about to say that I skate this specific amount of time everyday I just have to say nah, I don’t time myself or doing anything like that. I just end up going skating and whatever happens just happens. You know there was this “go skate every damn day” campaign. And that sounds sick but sometimes it is really hard to skate every damn day. Sometimes you got stuff to do. You know what I mean? I didn’t come home for a month and I own a house and have to do all this stuff. I have all this mail, I didn’t see my family and I have a new cat. I have all these things, which are not super serious but they of course take time. You know what I mean? My prior task is to arrange my life in a way that works cuz if I just skate all the time, I stress myself out cuz I push all this stuff aside. I am quite a lazy person. From this position realizing the point when I was a child to now. You know I am a professional skateboarder and I skate way less as I did as a child cuz there is so much more going in to everything else. It’s like traveling here – Day gone. Fucking Interviews instead of doing just skating. You know what I mean? If I would be at home, I would just skate every fucking day. In term, I don’t skate as much as I did. And that’s pretty crazy being a professional skateboarder that skates less than before. But yeah, happens.

Is that kind of comparable to let’s say NBA players?

Well, I think they have way more PR stuff than we do but there it’s like “The three in the third quarter was perfect! So what do you think about that?” they just like “I thought I should shoot and so I shot.” And yeah, those guys are traveling a lot, too.

Do you think skateboarding is taking a step more towards developing like real sport? I mean it is pretty much possible that soon it is going to be part of the Olympic games.

Ehm, I really don’t care, which way it goes cuz it gonna go to the direction it goes no matter what I say or anybody says. But for me, whatever way skateboarding goes I am just gonna go with the flow cuz I’m not gonna hate like “Fuck Olympics! It is not a sport!” or whatever. What would that do other than making me look lame and shit. I mean who cares? If you hate the Olympics you’re not going to be there anyway but you’re probably gonna watch it. You know what I’m saying? So chill out!

Let’s stick to skateboarding. I heard about Love Park is going to be shut down? What are your impressions about that?

Yeah, it’s gone, dude! They shut it down this morning! Nah! I am just kidding! (Laughs) They probably skate there right now! Oh, no wait! What time is it there man? Oh, eight in the morning! Nah, people might not be skating there right now. Although it would be a good time to skate there cuz there is all this bullshit around this place, fuckin’ break dancers and people taking pictures and stuff. There is this domino leaning against another domino and I could not tell you how many people I’ve seen ran to it and say like “Hey take a picture of me”. But I not gonna lie, I took a picture of myself and this thing, too. Thus, kinda made fun of myself, too. (Laughs) I kinda weirded off. You were asking about the future of the park. I heard they want to put a fence around it but that did not really happen. But people go there everyday right now skating cuz nobody really knows what will happen. The fence could go up every day. You know what I mean? 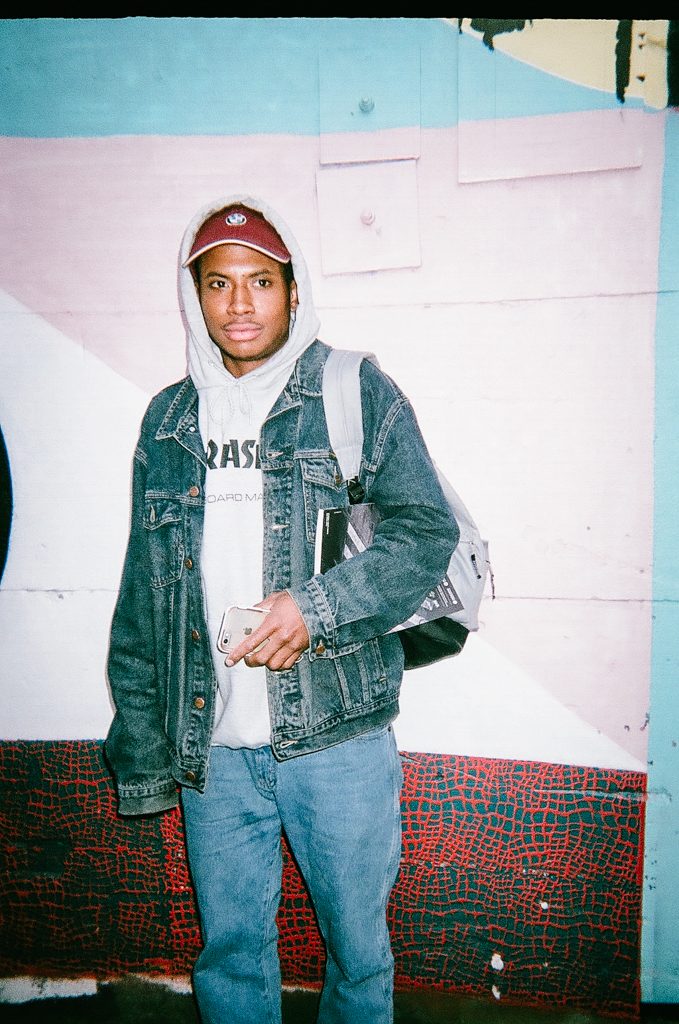 I saw you with some shopping bags at the cafe a couple minutes ago. So you did go shopping in Berlin?

Oh yeah! I went to that vintage store when I came here for that Fourstar trip and I just was walking around and kinda like checking out the area, bought some shit. And this vintage store had some fuckin’ cool cloths. So I went in there and got like three sick ass jackets. For example this jeans jacket right here. And I get compliments on that shit all the time. And its comfortable and warm. Skating in jean is really good, too. You know what I mean? Cuz if I fall I’m not gonna cut my elbow or anything. Shit is good! Whenever I wear it I am like “That trip to Berlin was tight!” And now I just had to go back to buy some more!

Would you say that you are into fashion?

Oh yes! I guess I am kinda into fashion. I am no dumb. (Laughs)

Where is your inspiration from then?

I don’t know. I just look at things I do like personally. When I’m like “That shit is tight!” I just put it on and try to make it me and tryna live in it.

Let’s get back to your career. Is there something you still want to achieve? Or are you at a point already where you can say: “Well, this is all I ever wanted.”

I was saying this earlier. Yo, if I would die now, I probably really couldn’t complain. I am living a pretty good life. I never would have thought in a million fuckin’ years that I even would have been at this point where I am right now. When I was a child I never had a dream. You know, while everybody said: “Yeah, I wanna be a professional skateboarder”, all I knew was that I wanted to skate for the rest of my life. And the only way to do this is to get sponsored. But I still never thought I would go pro. The next thing I know everything just fuckin’ took off. That’s really weird because I never dreamed of that fame and all this kids looking up to me and know who I am. That is fucking weird to me all these kids knowing me. I never fuckin’ wanted this, I just wanted to skate and have fun and skate for the rest of my life. That is when I have a picture in my mind. I never thought of becoming a professional skateboarder, which I am.

I know you drive a BMW. Are you into German cars?

The first car I owned was a Honda Cort and my sister crashed it and I was like “Aight, what kind of car do I want?” I was skating with this old dude, Ben, in Philadelphia who works on BMW’s. And he had this full swaggin’ pick up turbo diesel, which is fuckin’ amazing! I was looking for a car and was like “Dude, I fuckin’ gonna buy this thing off from you! Name a prize and it is mine!” He did not want to sell it because he also is a BMW guy and knows that they are hard to find and all this shit. So I started researching them but then I found a BMW E 30 and if you see that thing you just think that it is sick as fuck! And I was in California, in Scuba’s house and we were looking around there and found an E 30 for sale with an E 36 M S 50 swapped into it for ten G’s. And I was like “Yo, thats me bro!”. That happened only ten minutes away from Scuba’s house. And I got this shit and it was the first beamer I got.

Well, thank you for your time and the interview!