Jonas Heß is a good friend of ours and with the release of his new Converse part, we took some time to sit down with both Jonas and Leon Rudolph. Leon is a filmer who spends most of his time on the other side of the lens making people like Jonas look great. And he is about to premiere his new video “Hellafaded2k15” in Kassel on the 4th of December. We decided to ask the two similar questions, hoping to get different answers. Well, the result of those two conversations can be seen bellow.

How did you meet Leon?

I first met him once when I was skating in Fulda, and then the next time we met when I went to Kassel to visit a friend and we went out drinking with Leon. Through that, we became friends.

When did you start to film together?

About a month after the party in Kassel he came to Fulda and that’s when we started filming.

How was filming for your Converse part?

I liked it because when I’m filming with Leon, I feel at ease. Pascal is also nice to work with because I believe he will tell me when I’m slacking off. As long as I keep producing I feel like Converse will be happy.

Did you feel any pressure filming for your Converse part?

No, we didn’t have a deadline, so we could just film and when we had enough tricks we started editing the part. In the end, we filmed the part in about six months. I wanted some more tricks, but you always do, so I’ll save those for my next part.

When we went to Warsaw at the end of the summer your part was already finished. Why did it take you so long to release it?

Well, I picked a certain song and we had some problems getting the rights. In the end we chose to release the video over Leon’s channel instead of Converse’s so we could keep the part the way it was.

You sat down with Leon to edit both of those parts. What kind of influence do you usually have in the editing process?

Leon knows how to edit but I do make suggestions when it comes to the order of the tricks. In essence, I want to be happy with the flow of the part. I also chose some different music, some ‘50s Japanese Blues, because I thought it would fit better with Converse’s image. At the same time, I think you shouldn’t skate to the same type of music all the time because it gets boring.

How about your “Hellafaded2k15” part?

Leon uses the music he likes and that good because it’s his video, so he should have the final say. At the same time, the part is different from my Converse part because it’s an edit of the footage that I didn’t use for the Converse part.

But do you feel happy with your “Hellafaded2k15” part?

(Laughs) I’m not totally happy, because it’s not my best footage.

Have you seen “Hellafaded2k15” yet?

No, and I don’t want to see it till before the premiere because it’s more impressive if you see everyone’s footy when the project is finished. Unfortunately, I can’t be at the premiere myself but I’ll see it afterwards.

You are hurt now, how did that happen?

I don’t know, I didn’t hurt myself skating. It’s something I had before, my knee just starts hurting really bad and I can’t really bend it properly. It’s injustice (laughs)!

It was cool, we just went filming because it was fun. We went out with a crew and spent our day filming and having fun in the process. 2014 ended up being my most productive year because of it.

You recently quit Uber, how did that happen?

I didn’t feel any connection to the rest of the team. So I quit. Right now I don’t want to jump to somewhere else just because I need some boards. There are some brands I like, but for now I’m just buying boards.

What is the best thing about filming with Leon?

I don’t know. We often get the tricks we want, the way we want, and we like being around each other. The best part is having fun (laughs).

What’s the worst thing about filming with Leon?

I don’t know… Nothing, really. There is nothing I dislike about filming with him. I wonder what he said (laughs).

Your planning to move out of your parents’ house and go to Berlin. Why are you not going back to Kassel?

Kassel was a good city to be in for a year but I don’t want to go back there. It was nice to be back in Rimmels with my family, but right now it’s starting to get kind of boring to be the only skater in a town with four hundred inhabitants. Right now my focus is on getting my drivers license and when I have that, the plan is to move. I think Berlin is a good place to live, skate, and chill with the homies.

Does that mean you will be driving your stuff to Berlin? 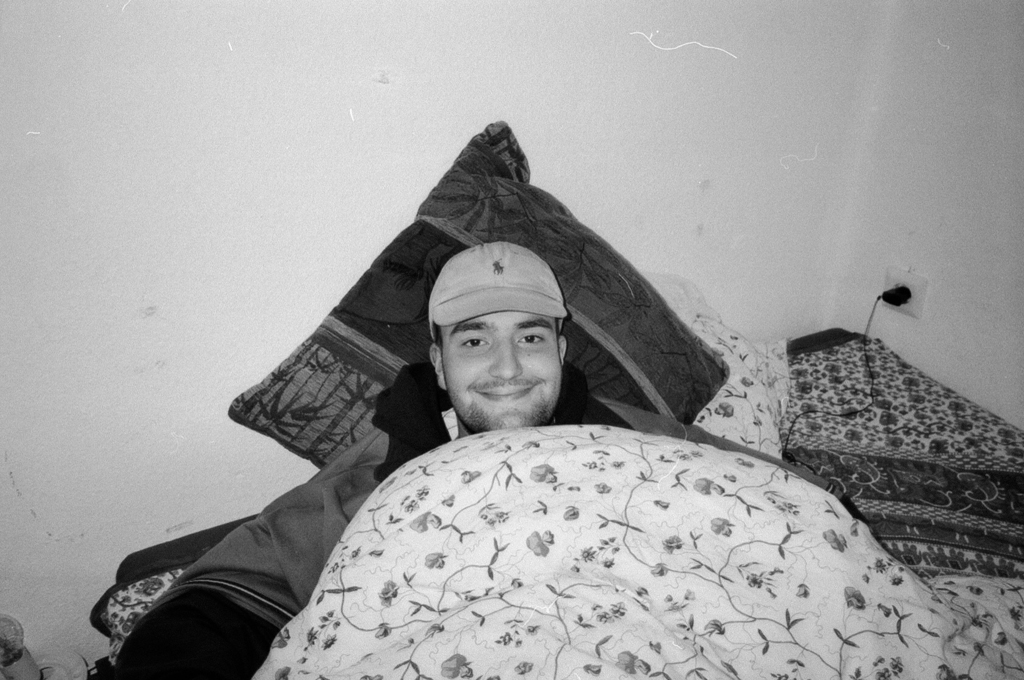 And for the flip side of the story, we turn our attention to fine lens man Leon Rudolph to get his perspective on filming with Jonas and his new video projects.

When did you start filming?

I started filming about four years ago, using a VX2100. Later I sold that camera so I could buy a VX1000 with an MK1 fisheye. Since then, I exclusively filmed with a VX1000. I’m on my eighth VX1000 now, but I still have the same MK1. People sometimes say I should clean the lens better, but it’s not dirt – it’s been scratched a couple of times.

Yeah, I even built one good VX1000 out of two that were broken. I fixed them by watching a YouTube video. That one eventually broke, though, because I didn’t fully fix the viewfinder.
When you use old technology, you are guaranteed to run into problems. I remember when we drove to Amsterdam and the tape deck wouldn’t open up so we only filmed on one tape (laughs).
Lately I’ve been thinking about switching to HD but that costs some money and I don’t want to sell my VX1000.

Haha, stay true to your roots. So how did you meet Jonas?

I met Jonas in 2013, I went to Fulda with a homie from there and he knew Jonas. The second time I met him was in the winter of 2013/2014, I traveled to Fulda with Jonas Albrecht and I asked Jonas to come with us and that was the start of our friendship.

Yeah, we filmed and edited it before but because there was trouble with the music rights, we are re-editing the part together and releasing it through my own YouTube channel.
For the Converse part, Jonas found a groovy song in a mixtape on Soundcloud.

So what kind of music did you chose for his “Hellafaded2k15” part?

Actually, he wanted to use a song you showed him – “Some Type of Way” by Rich Homie Quan. But that song ended up in a Quartersnacks edit. In the end were chose another Rich Homie Quan song, and combined it with a track by Soulja Boy.

Do you feel pressure editing something for Cons?

How is it filming with Jonas?

It’s quite relaxed filming with him. He said in other interviews that he only films with people he knows and knowing him makes filming with him easier. He will land the trick before we start filming just so he knows he can make the trick on film. Most of the times, he knows what he wants and how he wants it to look. He will film a line or trick about seven or eight times, just to be sure. To me, most of them look the same but he wants to have options.

I think Jonas just likes to go out skating with his friends. He is not out to film all the time, he just comes along.

So who will be featured in “Hellafaded2k15”?

It will have full parts by Jan Hoffmann, Moritz Alte, and all the footage that we didn’t use for the Converse clip will go towards Jonas’ part in “Hellafaded2k15.” It features almost the same guys from the “Uludag2k14” video, but there will be footage from the Jonathon the Dog Crew, too. Some footage of well known German skaters like Danny Sommerfeld and Robin Wulf will pop up. With Jan and Moritz, I sat together to edit the parts, because they got the most footage. We filmed some green screens and the video also includes some funny skits. The soundtrack will consist mostly of Trap music interchanged with some instrumental beats.

What can we expect from Jan’s part?

Well, I don’t know if you saw his Vans part but his “Hellafaded2k15” part will show a whole different side of Jan.

As far as editing goes, what has changed since your last video?

Well not that much, this video will be more of a “turn up” video. I did get a lot of feedback from the “Uludag2k14” video and I also read all the comments that people post but a lot of the times I feel like people just want me to change something to their style instead of my own. At the same time, if somebody would ask me for the footage to do his or her own edit I would be into that, that would be interesting.

What’s the easiest thing about filming with Jonas?

The best thing is when he has everything planned out and asks me what I think about it. That way we try create something together.

What’s the hardest thing about filming with Jonas?

He might not like me saying this, but the worst is when Jonas has his mind set on a certain trick and it isn’t working out. When he is in that state of mind it’s hard to say something without him getting pissed. That doesn’t happen that often thought.

Do you guys have any surprises up your sleeve?

During the filming for “Uludag2k14,” Jonas had about seven minutes of good footage and another five minutes of footage that was good but didn’t make it into the video, so I ended up editing that footage into a bonus part.

Sounds rad! Thanks for the interview and watch Jonas’s part again bellow.