For those of you who are not familiar with Bastiaan, he’s a member of the Pop Trading squad and he’s an entrepreneur who’s just launched his first brand (Budgetbeuker bearings) and he’s got stories for days. He might be what the game’s been missing but most important of all he’s a cool person who’s in skateboarding for the love of the game. Take some time and get to know Bats.

First things first, when I first heard of you it was by the name Batsi, how did you get that nickname?

Well my first name is Bastiaan and because that is quite a long name people tend to shorten it down to Bas but for me that turned into a couple of nicknames like: Batsoe, Baddhu, Batsi or Bats.

You were always rolling around with a crew, the Batskrew. What are the origins of that crew?

Batskrew comes from Haarlem, a city next to Amsterdam. It goes back to a guy who was a bit older, he used to write Batskrew on his board. Our crew didn’t have a name back then and we where really into Baker, Emerica and Krew and that’s why “crew” is spelled with a K. Every week we would go to a set of stairs that was one step higher, and we would try to kickflip or heelflip it. When all that was going on, the whole crew started writing Batskrew on their board and we also started putting out videos on the internet. The crew consists of friends that went to parties uninvited… in a sense we were being annoying kids. That was about ten years ago, we’ve all aged a lot of us work full time, go to school, have girlfriends and might even be living with their girls. Luckily we still meet at birthdays and other random parties.

You are known to dress in Polo by Ralph Lauren. Why do you have such an affinity for that brand?

I kind of stopped wearing Polo. But I always bought the Ralph Lauren stretch chinos from a thrift store in the neighborhood. One size fits all and the only cost eight euro’s, I’m probably wearing pants that used to belong to some overweight people (laughs). 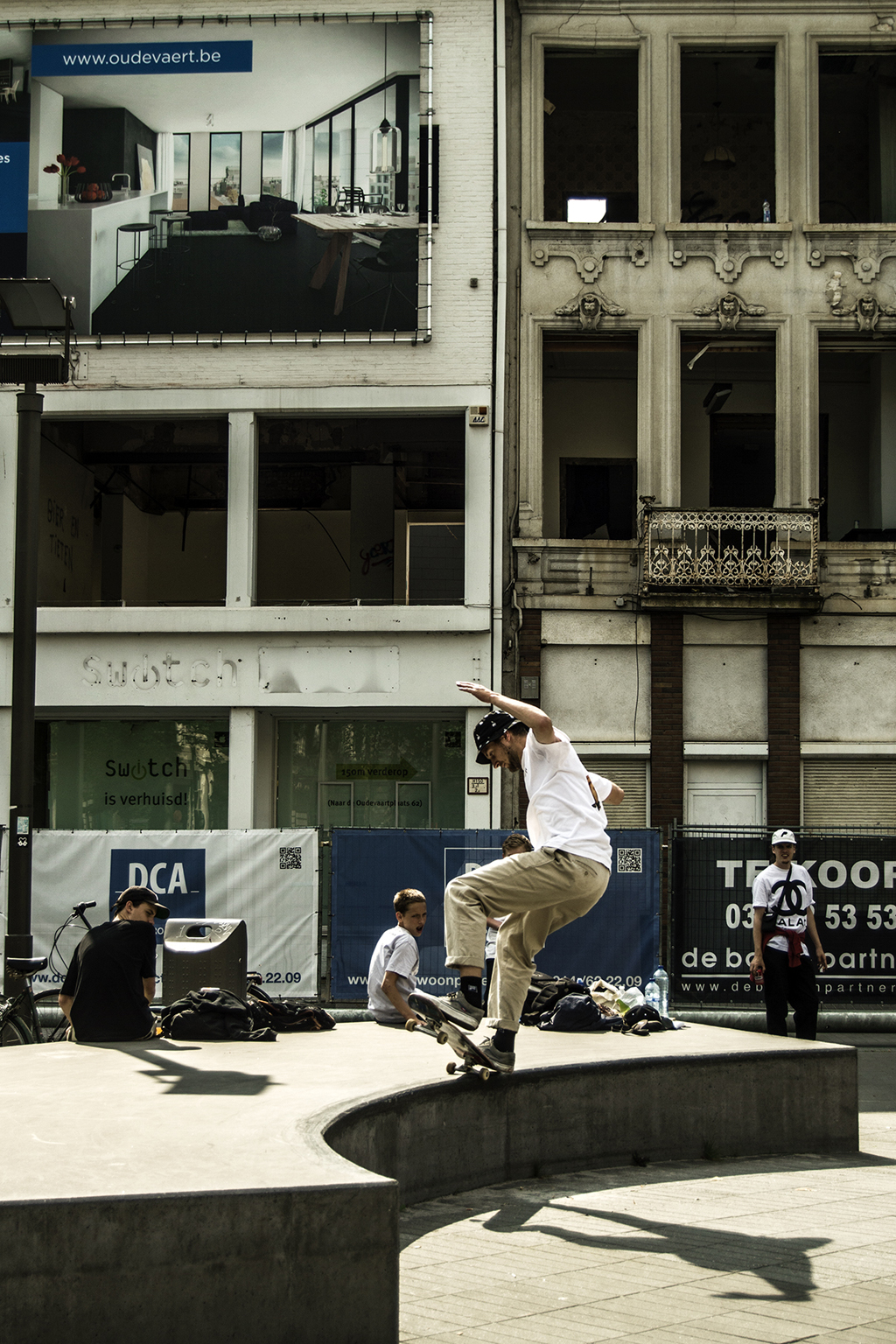 What is the story behind Budgetbeuker?

The whole thing started a couple of years ago. I was in Berlin with the Frisco guys for the Bright trade show ( Frisco was a shop with a distribution which slowly transformed into Pop Trading Company). I had spent most of the money from my study grant and I was almost broke. Luckily during Bright there are a lot of parties with both free booze and food. On that trip, a friend of mine gave me a T-shirt from Humana, the shirt had a print of a picture of a man with a guitar that said solitary man. The weird thing is that it wasn’t Johnny Cash on the shirt (“Solitary Man” is an album by Johnny Cash). Because I had so little money, I had to budget the cash that I had, the same day I got the shirt I got the name Budgetbeuker.

So how did that name evolve into something else?

Well, when I got back from Berlin I was working a job but I was only working two days a week.
I was living on about 10 to 15 euros a week but because I didn’t work that much I put the time I had toward starting a blog on Tumblr. The blog featured some skate stuff, some random GIFs and most importantly, the sale items from the local Albert Heijn supermarket. Because 2-for-1 discounts save lives! But as you might understand living off that little money wasn’t sustainable, I had lost weight and so I had to move back in with my parents. After a shitty kitchen job, I found a new job helping the elderly, which basically meant cleaning, drinking coffee with them and listening to their stories. I liked cleaning, I heard some interesting stories, reading the paper together and building up trust.
Over time, you get to know each other and you start to hear and see the same things over and over again. But I found myself spending more energy and getting less and less in return, it was hard to say goodbye but it was for the best. In the end though the money was not as important as the people and the goodtimes. As for the blog, less free time meant blogging less, the people over at Noise (a Dutch magazine) made me an offer to write two Budgetbeuker columns a year for the magazine. As time passed I wanted to start my own company, the first thought was a board brand but there were a couple of difficulties. First, all my friends already get hooked up with boards and secondly, the market in the Netherlands is quite small so I doubted I would sell enough boards. So in the end, I decided on a bearing company. I told the Pop guys Peter (Kolks) and Ric (van Rest) and they where hyped on the idea. Pop is really all about supporting the riders and helping us do what we want.

Do you guys have a team?

Budgetbeuker bearings gives me the opportunity to hook up the people I like, the people that buy random shirts at thrift stores, read discount handouts, and drink free coffee in the supermarket inspire me with their survival stories and are stoked on skateboarding.

I know you just launched the company, but what are your future plans?

The last couple of months I spent a lot of time on launching the company. I had to balance my work with the company and find time to skate. All the money I make goes right back into the company even if that means I have to live on a budget, money comes and goes. As for the future, I would love for shops all over Europe to carry my products, launch more types of products, take the team on tour, and so on. I don’t have the money to do it yet but you never know. I am excited and thankful that the bearings will be available all over the Benelux countries and for the fact that I still love skateboarding.

This summer you where in back in Berlin, and Pop was presenting at Bright and the team was out filming for a yet to released collabo with Live Skateboard Media. What was that like?

This was the first real trip as far as Pop goes. I mean, we did some weekends but this was the first proper trip, where everybody didn’t have a hangover after the first day. Willem van Dijk a.k.a. The Jester a.k.a. our Team manager (even though I have to manage him sometimes) got us at the spot and skating at around twelve o’clock. I knew everybody before, but I never spent so much time with all of them before. Things ran smoothly, there where no problems at the end everybody was hyped.
As far as stories go, Peter and Ric rented an apartment last minute, because everything else was booked and apparently the apartment was located in an area where a lot of gay people live. The apartment itself was full with postcards depicting half-naked men with suggestive slogans. One morning I was waiting outside for Hugo (Snelooper) who went to buy tobacco, everybody else had left to get breakfast. All of a sudden a guy walked around the corner wearing a combination of a blue and yellow hat, a shirt, and some diapers. He was just walking towards the army dump looking so comfortable at that same moment Hugo walked out of the store we looked at each other and started laughing so hard.

Yeah I’m supported by: Independent Outlet, Vans Benelux and the Pop Trading Company (they give me shitloads of Quartersnacks and Palace Stuff).