When I think about Stefan Janoski, I still see this guy with a loose sweater and a big smile from Habitat’s “Mosaic” video (2003), and then I’ll also think of his part in Transworld’s “Subtleties” video that came out only a year after that. Both have had a stronger influence on me than most other parts, to be honest: Everything about them, his style, the selection of tricks, the editing, music, clothing and atmosphere, the whole package was fresh and unique. He was in his early-twenties when he filmed these two parts, and to me, this period was the magic moment of his career as a professional skateboarder.

Right after, Stefan signed a deal with Nike Skateboarding and got the opportunity to design his signature shoe: the Nike SB Stefan Janoski. Actually, the process to develop his shoe took longer than average; Stefan put a lot of effort in this project, he turned down a whole lot of designs, did a lot of revisions, and he made no compromises until he was one hundred percent satisfied. Regarding the design, he always claimed: “function over protection”. The result of the demanding and challenging development process was a terrifically simple and contemporary shoe.

Accordingly, it has become one of the most successful signature models of all time, and Nike has released countless color-ways over the last seven years. There is a downside, however: The excessive success of Stefan’s shoe has unfoxrtunately overshadowed his skating in recent years. Today, Stefan is thirty-five years old, he lives between New York and Sacramento, California, and when he’s not skating, he dedicates some of his time to creating art and music. Early in October, we met up with him in Paris…

Yes, your German is perfect.
Is it?

Nothing, it’s all good. It’s just an article in which we tried to find some answers. How other countries see German skateboarding. What do they see in general, what you guys know about it…
I’ve been to Berlin, I’ve been to Germany a couple times but… Where did I go? It’s been a while… Frankfurt!

Frankfurt? That’s Crackfurt. Kind of… it’s so cracky over there.
Yeah! (laughs)

So you’ve been to Berlin?
Yeah!

Any funny Berlin story to share? What did you explore?
There is a lot going on… I’ve been there for Analog with Arto and…

Well, then you must have a funny story.
Oh yeah, pretty crazy. He’s a funny guy with orange jackets and stuff like that. Yeah, Berlin was fun. It was, like, a few years ago, I guess. But I like Berlin, it’s a good city to skate and really artsy, too. So international… Doesn’t feel like you’re in any country really. Sort of like a mix of everything.

Are there some skaters you know from Germany?
Willow! Is Willow German?

Then you probably know Lem.
Lem? He’s German? I didn’t know that!

No, he won the éS Game of Skate against Chris Cole back in the days. So we always call him the world champion!
Haha, that’s awesome! 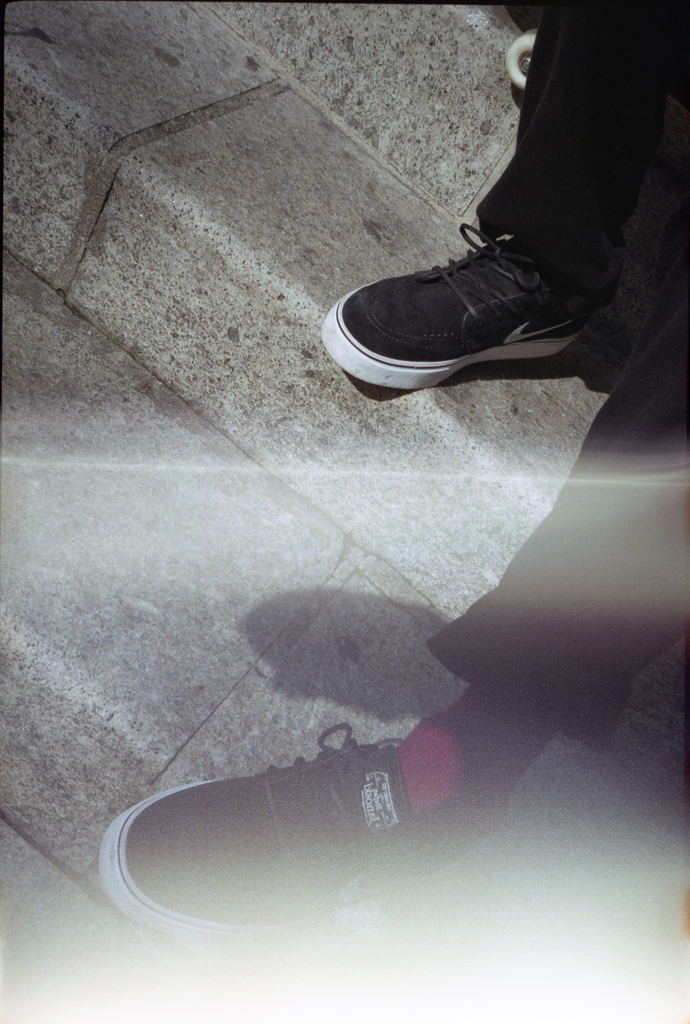 So you know Berlin and a couple of skaters, but you’re not really into the German skate scene. For you, it’s more the European scene, right!?
I mean, I haven’t been to many other parts of Germany. So, I don’t know much about the skate scene. But my friend Steve Forstner does.

Not when it comes to the accent… but yeah!
He’s a friend and took us around Germany, so I’m sure I met a lot more people than I remember right now.

We took a look at your sponsors and we didn’t find any energy drink. You need shoes and clothes, but you also have to drink something. Why is there no drink on your list of sponsors?
I guess because water and beer and wine don’t sponsor skaters. Coffee, water, wine, beer and juice.

No, that you bought the name Nike, didn’t you?
I think the rumor is Nike bought my name. But it’s just stupid internet shit… I don’t know where that came from. The rumor is that I sold my name to Nike, but I don’t even know how that works really. I think it was the talk-show kid who started this… I don’t know why. 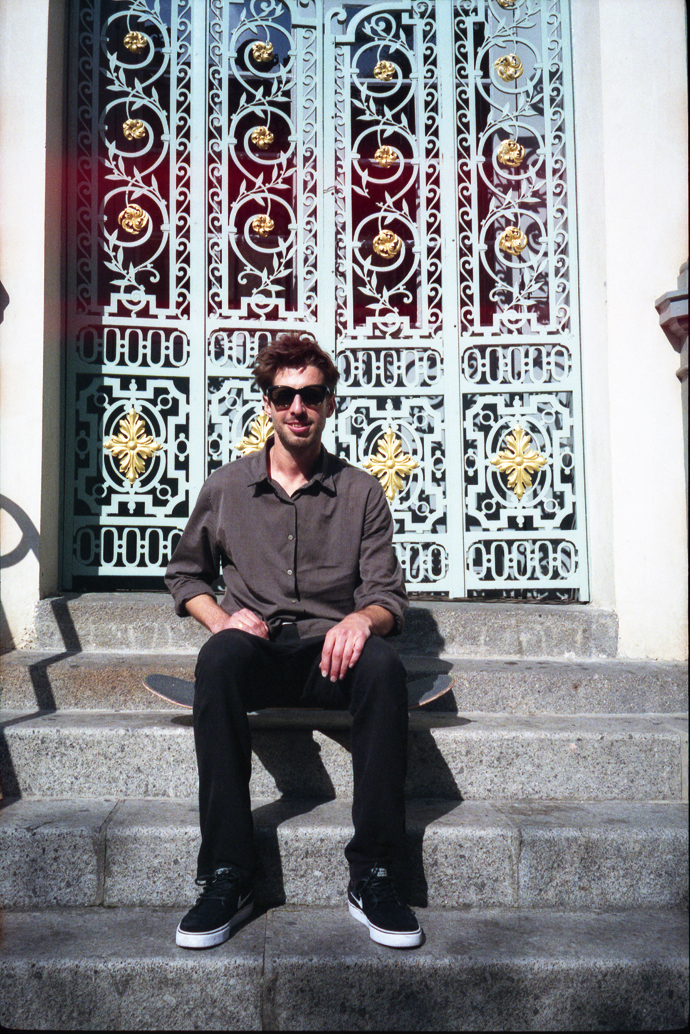 So we were skating last night in Paris, and everybody is wearing Chucks and is doing No Complies and Wallrides. We went from Wallride spot to Wallride spot to Wallride spot and everybody is doing No Complies. And that’s, like, a thing from the 80s. How do you like this trend in skateboarding, this indie/alternative style… No Complies. Are you practicing them or doing them all the time?
No Complies? I mean it’s just flat-ground skateboarding. Skateboarding is just this thing that’s heavily trendy, you know… It’s like trend to trend to trend to trend. It’s just the way it is. Like what are the tricks we should be doing? Is it Bigspins this month or should we now crook the rails? So right now the people do No Complies. I think it’s a lot better than these pressure flips. They try to seek their way back in, too. I don’t think they should. At least No Complies are cool. (laughs)

So is there anything you really hate in skateboarding right now or something you can’t look at? Like Street League or some other stuff?
I don’t hate anything. Street League is good for the skaters who get to make some real money, so I think it’s good. I mean, it’s like the outside world trying to make skateboarding into something that they can understand and it’s never gonna happen. It’s a good thing for the skaters, you know?

Yeah, and I also like to watch it. Just for fun!
And it’s exposing skateboarding to more people. You know, like, you can’t hate it, it’s just the kind of stuff that makes it on TV exposes more people to skateboarding. So they might start with a Rob Dyrdek board or a Bam board. Then they get into actual skateboarding and then there’s other skaters too, you know?

Was there one moment when you realized that your shoes were selling really well?
No, it was pretty gradual, but I have to say, last month I went to Barcelona and I saw a lot of people wearing my shoe. Just like people, tourists and kids and women…. That was just insane, really crazy.

Isn’t it the same in the US?
Yeah, it is. But I guess it was Barcelona during holiday season. So you kinda had, like, all the European backpackers and tourists. So there were like longboarders and backpackers and skaters and girls and everyone. But they all had my shoe. In every group was one person that had my shoe.

Sick!
And then I’d be right next to them, they wouldn’t know who I was. And this is just like pretty wow. If you’re coming up asking me for directions in Barcelona wearing my shoe, like having no clue… That was insane.
But isn’t that way cooler compared to everybody who wears your shoe knowing who you are?
Oh no, I love it so much! It’s perfect, yeah. (laughs) It was gradual, but it’s pretty crazy now.

Ah, okay, but you don’t want all of them to shine?
It depends on what the sculpture desires.

There is one question left, what are you doing in Paris right now? Just skating?
There is a party, an art show tonight. With a little video about me that Desillusion did. And that’s what I’m here for.

When do you leave?
Tomorrow.

Ok cool, that’s it. See you at the party later. And thanks for the interview.
No problem, you’re welcome.