A nice little preview from the crew that young people love and bitter people love to hate! We for one can’t wait to see what Mikey Alfred comes up with.

It seems that today is all about the future of skateboarding, with videos by both Antosh Cimoszko and now Mikey Alfred. The two of them clearly take heavy influence from music, musicians and youth culture in general.

It is great to see how different and original both their videos and concepts end up being.

A new IC Promo, straight from the City of Angels. Those guys are having fun, that’s for sure. The movie is going to be live over at Viceland soon.

When I met Sage, he told me that he often feels like the guy interviewing him becomes his friend, so he’ll talk to them about everything. Sometimes that will get him into trouble, at the same time I feel like a person who is confident enough to be himself at all times is a breath of fresh air. That doesn’t mean that some things can’t be private, but being open might make all the difference when it comes to a person’s longevity in the skateboard business. Because what interviewer likes to hear the same answers over and over again? I certainly don’t. Sage is a natural who isn’t afraid to have his friends’ back and speak up about people or things he doesn’t like. Here’s the 18 year old FA team rider from New York in his own words.

You’re on a European tour with the CONS team right now. Any interesting stories so far?
Nothing much, dudes just ripping. Motherfuckers are all good as fuck, there are not many stories though, we drove around from skatepark to skatepark, from spot to spot. I do feel like on a Europe trip it’s a lot harder to eat, I just forget to eat. In Paris for instance I just ended up eating three baguettes a day at the most, in the US it’s a lot easier because you know where to go to get some food.

Last year the Illegal Civilization crew came out with their second video, a lot of people were shocked by what they saw. Can we expect something new from IC this year?
My friend Mikey Alfred makes all the IC videos and clothes but right now he’s working with Tyler The Creator a lot so I don’t really know what’s going on. But the IC2 video was sick, it was one long big inside joke. The video is just about us hanging out and skating together, we’re a group of friends going out cruising.

A lot of people were hating on the video because they felt the video contained things like animal cruelty but I personally don’t feel like that, the video is sick! I didn’t like my footage, though. Most of my clips where too old and the tricks were weak, but Na-kel, Kevin, and Tyshawn really came through with sick parts. 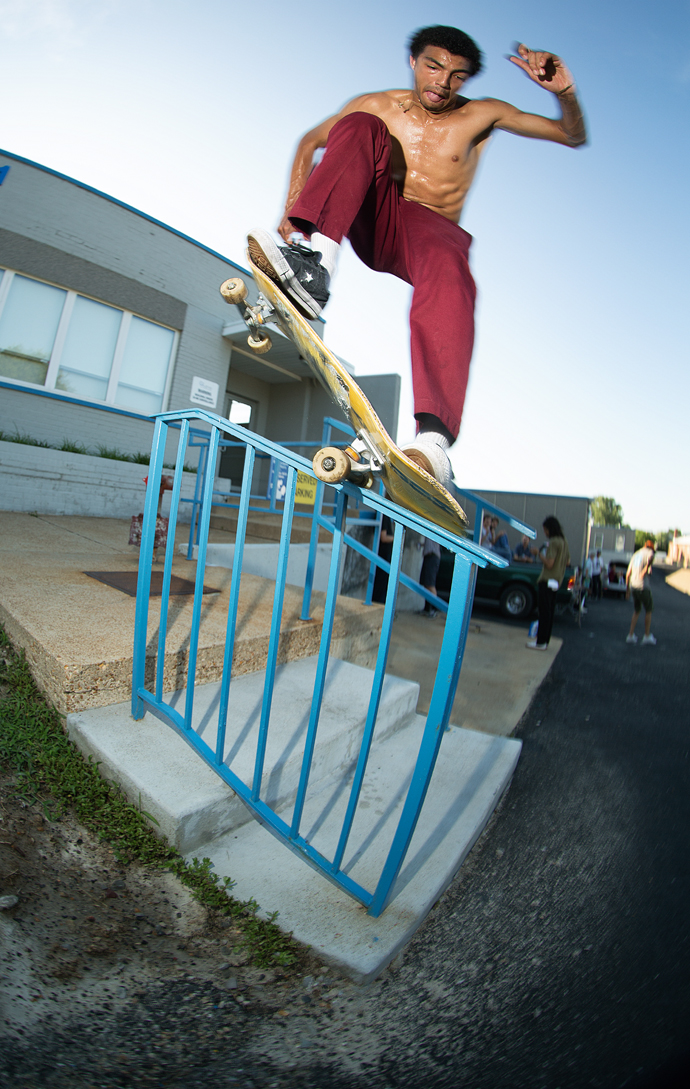 Is there a difference for you between a Converse Project or a Supreme type thing?
With Supreme, making a clip is super natural, we all grew up skating together and we still skate together almost everyday, it’s just the boys: we go skate, some days we might not go skate, some days are terrible and we argue, some days are great, but it’s always a lot of laughter because we are amongst friends. For me Kevin [Bradley] is just an inspirational guy. He’ll smoke ten blunts and all of a sudden he’ll start skating, Bang! He’ll land a sick trick, that makes me want to step it up a notch, too. I think there is a Supreme thing coming soon, though.

Do you feel like you do your best skating when you are amongst friends?
It depends… sometimes when I’m on a tour like this, I want to step it up a notch.

I noticed a couple of people hating on Sean [Pablo] does that happen a lot?
Yeah! I hate when people talk shit on Sean. Somebody started to try and one-up one of his tricks so when Sean landed it first, I went out on the course to show Sean some love. People are just mad because he’s 17 years old getting flown all over the world, he’s got a great style, and he’s pretty. I look at it this way, though – if people are not hating on you, you’re doing something wrong. Dylan [Rieder] is one of the best skateboarders in the world, sometimes I call him super Dylan. Sean gets a lot of the same hate Dylan gets, it’s not their fault that they are fucking gorgeous. They skate like ballerinas, it’s just natural for them, it just looks to good for some people so they start to hate on them. But Sean’s my friend, so I’ll always have his back. That’s why Fucking Awesome is the best. You can just do you, paint your nails, make your own clothes, start a ‘zine, all that stuff.

Do you get to do some of your own FA stuff?
No, Dill does all the graphics himself. Dill is like Cinderella’s step mom. He wants you to be on point, I might meet up with him and he’ll say: “That shirt sucks, take that off.” That’ll leave me feeling embarrassed at times.

I don’t think he would say that about the shirt you’re wearing now (Sage is wearing a Malcolm X T-shirt).
Hell no! This is something everybody can fuck with because it says something important: “I will join anyone, I don’t care what color you are, as long as you want to change the miserable condition that exists on this Earth.” Dill taught us a lot, though. We all came up pretty fast but at the same time it feels really natural. Dill is strict but he isn’t mean for no reason and it’s working. FA is our shit! It’s crazy when I travel to places and I see the influence we have on kids. It’s still kind of weird. Supreme did that poster of Kevin in Thrasher. (BS Tailslide as seen in the Supreme SF clip). Now kids all over the world are hanging that poster on their wall. To me, that’s so sick!