Our good friends from Poetic Collective just dropped their new video “CLOUDS” and it might be the first full length ever that has a 50/50 balance of male and female skaters. Poetic’s pros Helena Long, Samuel Norgren, Simon Kallkvist, Santiago Sasson are the foundation of the edit and are backed by the rest of the team’s appearances throughout the 22Min. long video. It also introduces Britain’s Josie Millard to the team.

As I make my way into the city from the airport, the rickety subway line I’ve been riding so far is replaced by one which reminds me more of a movie poster for Metropolis – huge caves of concrete and glass echoing the footsteps of hundreds of commuters as we collectively make our way up to street level.

Up here, the metropolis is mostly gone. In fact, you’d be hard pressed to find a building in the inner city that reaches higher up than the caves of the subway reach down. Instead, the facades looking over the street tell of a kind of lost grandeur – beautiful old buildings worn down through the decades.

I came here with a group, and as always when we travel together, we came here to skate. But this time I am focusing as much on the city as I am on the board.

“Our everyday life in the built environment
is far more complex and intriguing in reality.”

I meet Gergő Hory at Studio Gallery – a small art gallery and studio space a few miles west of the city core. As we speak, Gergő is very thoughtful, it seems he does not want to rush into someone else’s point of view, but would rather consider his own. When I ask him about Budapest though, he smiles and gives me a reference.

“I heard someone describing Budapest as an old lady once – a bit dirty, she’s seen better times. She has a makeup on which is a bit old fashioned, trying to pretend that she has some kind of greatness and elegance but in reality, she is a little bit poor and not as elegant as she wants to be. Some kind of lady who pretends she is a bit younger. Well, if you really want to experience the atmosphere of Budapest you ought to listen to Tamás Cseh. He was like the Hungarian Bob Dylan you know, with one guitar and very very strong verses. The melodies are melancholic but very lively at the same time, listening to it I think you can grasp something of the essence of this city.”

Gergő moved to Budapest in 2007 to study architecture and is now doing a research project while working as an architect. Coming from outside and being a student of architecture, he has been able to see how the city has changed over the years.

“It was very different some five or six years ago, that time I think it was more inspiring than it is today. When I came here the now very famous ruin bars were not so famous. For example, you could walk into places like Szimpla and spend the whole day there brainstorming with your friends and working on projects. Today some of those places are either not existent anymore or they are full of people who go there to party. Tourism has really transformed some of these places.”

Going into it, Gergő knew very little about architecture. He had been interested in art and drawing before, but it was the multidisciplinary nature of architecture that attracted him. During his studies he was also active in a group that did different kinds of interventions in public space, aiming to provoke the city dwellers to take notice of their surroundings.

“When the new metro line was still under construction, the whole city was filled with barricades. It lasted for almost 10 years I think. It was a very haphazard and expensive project which created a very chaotic situation for people. We wanted to make it even more chaotic by building a fake construction site for a fake metro ventilation shaft on a very narrow street. To provoke, and to show people that it is insane what’s going on.”

“As a member of the group I experienced during the projects that the everyday life in the built environment is far more complex and intriguing in reality than in the abstract world of most university design courses.”

After a while, the local residents started protesting and demanded it would be taken down, which in this case was actually the success of the project – to raise awareness about our everyday physical environment.

Perhaps the way we relate to space and what demands we put on our surroundings is not very apparent to us until our surroundings get in our way. But thinking about the others out in the city looking for places to skate, I can see that skateboarding is an exception to this rule.

In skateboarding, the relationship to space changes dramatically; everything around you is either an opportunity or an obstacle, and this can be very different from the experience of a pedestrian or driver – an obstacle walking or driving is many times an opportunity for the skateboarder. This is my strongest relationship with architecture, a physical and experience driven one, one that leaves me with sore legs and hands so dirty it turns the tap water brown when I wash my hands in the evening. 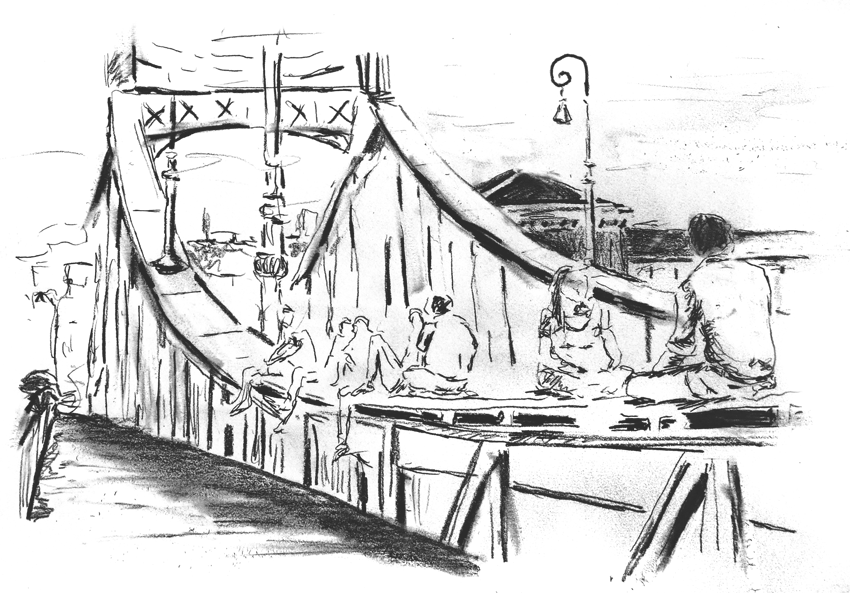 Talking to Gergő I get another perspective. He is working on a research project about public spaces being used for something entirely different than what was intended. It is something which skaters are very good at.

In my research project, I deal with these types of uses of public spaces which are not intended but just happen informally. I think it’s a great thing. They are things that a designer can hardly cope with sometimes, but you can learn from it, of how people relate to space.

I think architecture is good if it serves many possibilities for different uses, and it is not over-determined, over controlled. However, people’s behaviors will find their way even in the most controlled area, if they want to use it differently they will use it differently. In many cases, it leads to very interesting situations. You know the classic example – there’s a park with designed pathways but users usually don’t use the designed pathway but the shortest path instead.

The phenomenon Gergő is talking about is called Desire Paths, and it is happening everywhere. It is of course often based on a need (“I need to catch the bus”), or maybe a disdain for the alternatives (“no way I am walking all around this thing!”), whereas in skateboarding it is more related to some kind of push and pull play with objects and spaces. What they have in common though is that they both stem from the question what if? What if I could just cut through here? And as with desire paths, once someone answers that question, a hundred others will follow. In a park, this creates a beaten path, in skateboarding, it is how new skate spots are born.

“It’s not about intentional design,
the people themselves design the city.”

Moving through Budapest, I notice one very public display of this behavior. The Freedom Bridge, one of the many bridges connecting the two sides of the city, Buda and Pest, is a massive steel construction used by cars, trams and pedestrians alike to cross the water each day. Except nowadays, not everyone who walks onto the bridge aim to cross it. The construction of the bridge mimics that of a suspension bridge, but in place of wires forming the classic arcs, the Freedom Bridge uses broad plates of steel “hanging” between the two towers. In the middle of the bridge, the structure reaches down low enough for a person to climb, and on warm evenings you’ll find people scattered all over this oversized bench enjoying the last of the sun reflecting off of the river.

“In the case of the Freedom Bridge, I wouldn’t say that it was designed badly just because the designers probably didn’t think about that people will sit on it. It’s not about intentional design, I mean the people themselves design the city.”

It seems architecture is not just a building or a structure, it is the relationship between an object and its occupant. The architect and the user both produce architecture — the former by design, the latter by use. However, one object can have an infinite amount of different relationships with different individuals.

This begs the question of authorship. If the purpose of an object or a space is tied to use and not to form, then who really creates the city?

“Use is a challenge for design since the designer cannot have full control over it. No matter how controlled and deterministic a building or a space is, human behavior will find the loopholes and implement unexpected creative uses. This uncontrollable side of use fascinates me.
If a street or a bench is used by a skateboarder for skateboarding, then it is not a bench anymore. But only for that moment.”

I say goodbye to Gergő and head out on the street again. When I get back to the others, I notice something else – not only do they have their own relationship with the objects around them, but they are also actively questioning them, constantly changing them, twisting and turning them, both physically and mentally.

“I think a building is a manifestation of a social network,
a way of thinking and a way of living”

Of course, the most literal change is the marks left behind – chipped curbs and benches, dark marks on walls, ledges, and rails. This is one of the most common explanations as to why we should not skate somewhere – it is the reason we got kicked out from Fővám Tér by the Budapest river side for using the small plateau as a skate obstacle – and it is often put in terms of destruction. But I can’t help but think that it is only half of the explanation, because while the marks (and the sound) may be somewhat provoking, perhaps the bigger provocation is going around saying things are not what they are, that they are not what they should be, and in doing so claiming the space as your own.

“You can say a building is a piece of art, but I am not really interested in that. I think a building is a manifestation of a social network – a way of thinking and a way of living, these patterns of usage then creates then the physical form. To me, this point of view is more interesting. The buildings, they don’t change much, but the usage changes very rapidly.”

In this way of thinking architecture is not solid, as its concrete foundations might suggest, but instead incredibly fluid, existing only in a temporary space between the object, the user, and the way they use it at a specific time. And skateboarding might just be one of the most elaborate displays of it. 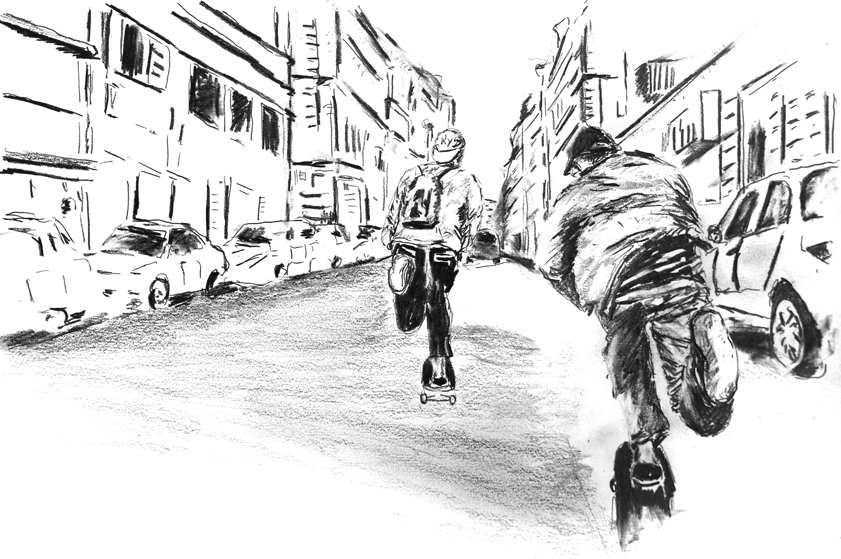 Gergő Hory is an architect living in Budapest. He works at PRTZN – Partizan Architecture, a studio he established in 2013 together with friends Zoltán Major and Péter Müllner. The group that he was a part of during his studies was called Space Detournement Working Group. Gergő is currently doing a research project surrounding the unintended uses of public space.