Two weeks ago I got two DM’s, one from Sarah Meurle and a little later one from Josie Millard “I am coming to Berlin with (insert the others name.), want to hang out?”. I did want to hang out, it would be cool seeing them again after our days in Paris at the end of the summer. So I texted the people from the Nike SB Shelter and asked them if I could join the “Girls Night” session, “Of course you can.” they told me. “Would you guys be down to feature it on the site?” “Why not, we want to know more about the girls’ side of the Berlin skate scene.”
Finally, last week I stepped into the skatepark and spent some time with my friends Sarah and Josie but I also found some time to talk to two of the skaters present at the event. They had a lot to say and thus this little feature turned into a full interview.

Pictures by Kyra Sophie.
Text and Interview by Roland Hoogwater.

Let’s start off with both of your names:

Pernilla Stadler, like Adler (German for eagle) with the st in front (laughs) and I am Lea Isabell Uhle


Can you tell me why you came to this “Girls Night” tonight?

P:
I have been actively skating for about 4 years now, Skating has been the most important thing in my life for a while now. Two months ago I moved out to Berlin and I wanted to find other Girls in Berlin that skate. So, when I saw the Facebook event I directly went to apply, I really appreciate that they are organizing an event like this.

LI:
I was planning to come here after I finished my day at the University and my boyfriend sent me the Place Mag Instagram story.
He told me, Josie and Sarah, we’re going to be there! He knows how much I like their skating, so I went.

How did you get into them?

I love their skating, I got into it via the Poetic Collective Instagram and it took me a while before I figured out that Sarah skates for them. After that, I liked the brand, even more, cool product, lifestyle, skating and on top of that a girl on the team! I think the fact that they support girl skateboarding is great. Sarah really inspired me.

As far as Josie goes, in England, there are so many girls ripping it is crazy! I fell in love with their style of skating and that is how I found out about Josie. Can I tell you a story? One time at night, my phone lit up on the nightstand and I looked at it and it said @josielorie liked your post! I couldn’t sleep after that, my heart was beating so hard! For me, they are role models. 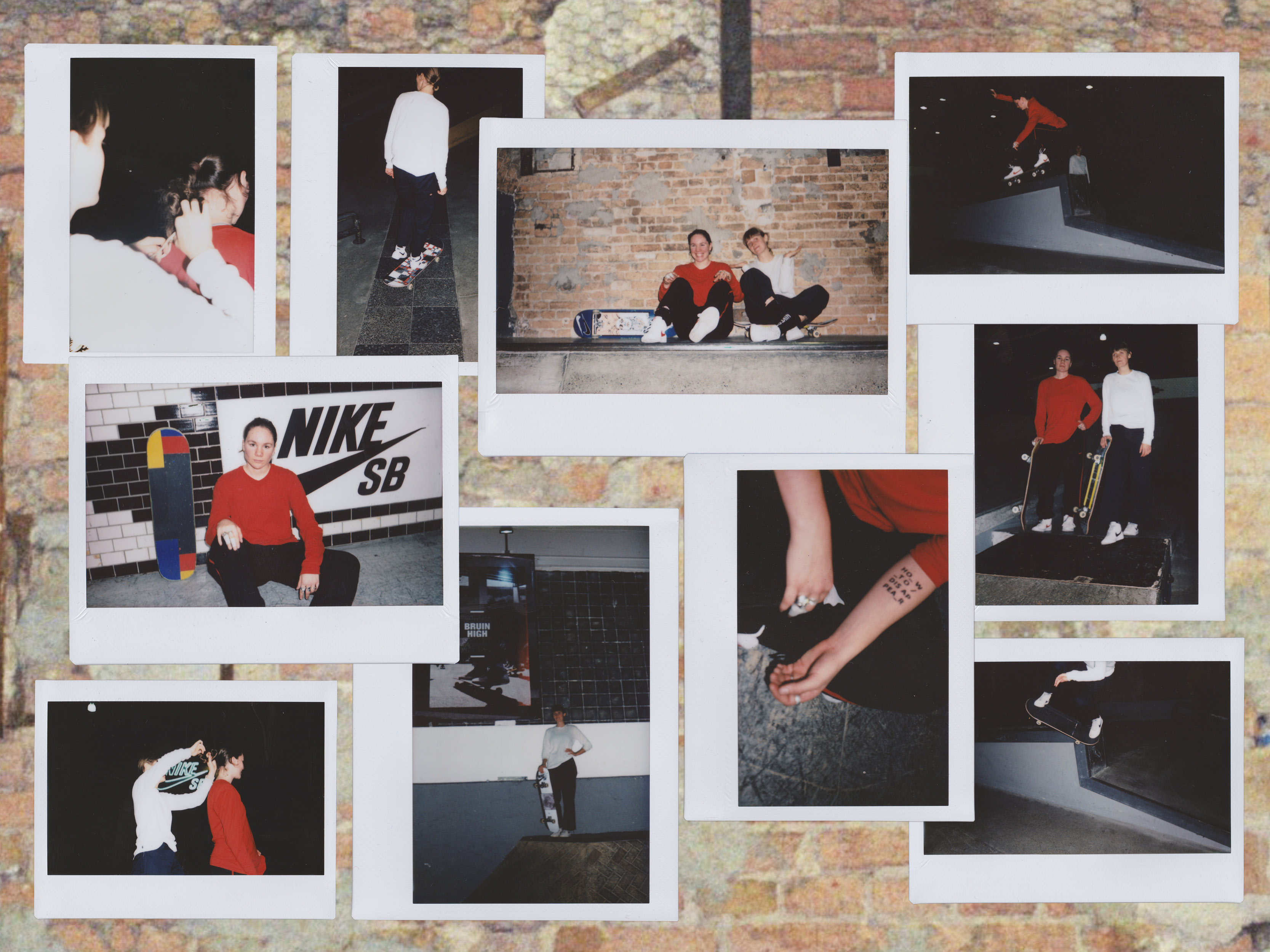 What about you Pernilla, are they your role models too?

P:
I know a lot of female pro skaters mostly from the USA though but I did not know these two.

Who are the skaters that you look up to then?

P:
I really like Leticia Bufoni and Lizzie Armanto. Female pro skaters have a real influence on the girl skate scene.

Four years ago when you (Pernilla) started those role models were not a prevalent as they are today though.

LI:
A lot of girls saw footage of other girls skating through Instagram and I think it showed them that skating is not only for guys. They can get out there and do it the way they want to do it. I also believe that the attention that some brands put towards female skating inspires a lot of young girls.

P:
It is really motivating to see other girls skating!

So is this event bringing girls together or are there already some crews out here? Are girls skating amongst themselves or are the crews mixed?

P:
Yes! There are some crews in Germany, Facebook and Whatsapp groups do exist. But I am still getting to know the Berlin scene, it does seem a bit underground.

What do you think about the fact that Nike SB put out a shoe especially for Women?

P:
I think it is great! Even before that I really like the fact that they put out things in unisex sizes. I really like their shoes and I haven’t seen other brands put out shoes specifically for women yet.

How important is the fact that they did not use any typical “feminine colors”?

P:
Me personally, I am not that into those type of stereotypical colors, a lot of girls that skate don’t wear girly clothes when skating. I don’t want to be boxed in like that.

LI:
I do really like wearing pink and lilac (laughs).

What about the media, are we as a whole covering what is going on in the female skate scene?

LI:
It is coming but in my opinion, it is still not enough. We see female skaters in magazines but it isn’t at the point it could be at.
Also at contests like the German COS Cup (*editors note other contests as well), you see the difference in prize money. Of course, you could argue that at the moment maybe the girls are not bringing in the amount of interest that the guys are but as that changes those things should change too.

P:
I feel the same, you do notice a change though.

Stefani Nurding is featured in our current “Funbox” issue.

LI:
I really like her, she skates in some cool outfits! Of course, I like to wear some baggy dickies from time tot time but Stefani shows that you don’t have to give up your feminine side, you can skate in all different sorts of looks.

Do you agree with that Pernilla?

P:
I do really like baggier clothes, I only buy unisex stuff.

Of course, you don’t have to lose your feminine side by wearing baggy clothes. Is there such a thing as your skate clothes?

P:
I wear what I wear, I don’t really tend to change my style. This is how I look all the time.

Both of you are not originally from Berlin Lea Isabell you are from the Ruhrpott area and Pernilla you are from?

P:
I am from Sachsen.

Do you notice a difference between the girl scene there and here?

P:
I come from a small city where I was the only girl skating. So I always skated with guys. In Sachsen, there wasn’t really a scene for girls like here in Berlin.

LI:
In the Rurhpott the scene was bigger, I had my squad of girls. The heckmecks where there, at the same time girls from all over the different Ruhrpott cities would meet up and skate together.
In Berlin it feels like the girls are more dispersed, they skate alone or with a group of guys, a real group of girls that skate together is not something I have seen here. But I haven’t been here for that long, so maybe it is not what it seems, I hope that events like these will change that.

Alright! Thank you so much for talking with us. Enjoy your session.