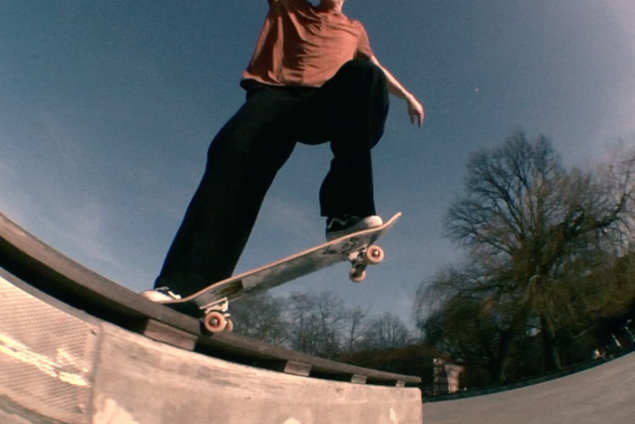 Tom Botwid & Film Trucks go together like Slappies and Jérémie Daclin so for Film to do a Pro truck...
Read On

Ten years ago Munich skater David Zeidler came up with something he thought was a brilliant idea. He wanted to create a German board company and make a living of it, he tells me over the phone and starts laughing: “Turns out, it doesn’t work.” Back then a lot of people were starting companies selling apparel, but there were only a few German brands making boards. “Hardware is the supreme discipline, the most honest thing”, he says.

After spending a few thousand bucks on the first series of roughly 350 boards he realized making money with boards is harder than you think. “You have to sell loads to earn something.”

This could be the end of the story and Germany has seen a lot of brands coming an going, but Salut Skateboards is still there. It may sound strange, but maybe the death of success was the key to its success. For a long time, the two owners Marc Stevens and David have regular jobs and they don’t depend on the little money they make from their brand.

So for their 10th anniversary, they decided to give a present, a trip to their team riders and figured it would be a great idea to skate the french city, Lyon, for a week.

It was a funny mixture, because most of the team riders are well in their thirties, and skate only once or twice a week. They have families, some stopped drinking, almost no one smoked. Instead of puffing away the first joint right after waking up, yoga techniques were discussed and someone asked what the others thought of contrast showers to prevent muscles from getting sore. In the evenings some would drink tee while others chugged down beers and listened to 90s hip-hop from a boombox that reminded them of the times when a switch crooks was considered a trick and they had it on lock.

The funniest moment was probably meeting Jeremy Daclin who’s closer to 50 than 40, we met him at a slappy curb which he destroyed with various maneuvers while the Salut team helplessly tried to perform slappy 50-50s.

Luckily the team riders found some other places they were more comfortable with and the French sun and the superb spots helped the squad to stay motivated and fight aching muscles. So enjoy the pics Conny Mirbach shot and the clip I compiled from images from three different cameras filmed by seven different people.

All photos credited to Conny Mirbach.

While we were in Lyon, working on our ‘Holiday Issue’, Sondre and Amandus Mortensen were also there and filmed this postcard for you.

This October the team packed their bags and headed straight to the birthplace of the former skateboard company Cliché skateboards, Lyon, France. The younger version of me grew up with videos like Bon Appetit, showing some of the best skaters of France, like Lucas Puig and JB Gillet, killing the beautiful marble curbs. To me, it seemed like a great idea to give our youngest crewmembers a good lesson in the history of skateboarding.

The little dudes, Mats (13) and Jaïr (14), are starting to grow up like heavy players in the game, so we think it’s important to show them what it’s like to be on the road and teach them how to get around in an unknown city.

The funny thing is we try to teach them something, but in all cases, we try to keep them as childish as they can be. Because in fact, they are teaching us how to be kids again. It’s all about fun and creativity.