After countless votes, a final draft and, Go Skateboarding Day, it was finally time for the new and improved DSS to be opened for the public. To celebrate this event, Nike SB invited everybody to destroy the park (not literally of course). People from all over came to a spot that is named after poop only to find out that the end result was the shit! In the end, your votes ended up creating a real nice location for us all to skate and that is what we did skate!
Hit play and see the lovely mayhem that was the Project DSS opening session.

Next week there will be another event at the DSS, this one will be in connection with the Berlin open so if you enjoy the park had fun at the last event and are down to earn some cash reserve a spot (no registration needed)

Yesterday the much anticipated Project DSS was completed! To celebrate this in an adequate manner, Nike SB invited everybody for a first open session. After starting with a shoe release event of a Nike SB and Skate Mental collabo at the Civilist Store a shuttle bus directly took the crowd to the brand new skate park. Hundreds of skateboarders and other bystanders gathered together to either skate or just watch this outstanding result of so much passionate work. One could clearly tell from the excitement that the park even outranged the high expectations! With a best trick contest with altogether 1500€ prize money the park was officially inaugurated. Afterwards, the session went on until sunset while drinks and pizza slices were served and music was played. I think I can speak for everyone if I say that the whole project was a great success and brought Berlin for sure its new place to be!

For those of you who haven’t heard, coming Monday the 27th at 7PM, the new and improved Project DSS will be opened. This event will be celebrated with some great skating by the Civilist, Nike SB, and Skate Mental teams… but at the same time, the event will be a Pizza party! The last couple of weeks the people of Yamato Living Ramps and their volunteers have been working around the clock and in all sorts of weather conditions to present you with a new and updated version of the DSS.
So if you are coming to Berlin for the Bright, are on a summer trip to Berlin or you just want to eat some pizza, come to the DSS next Monday.

Join us, head over to the Facebook event to find out the exact details. 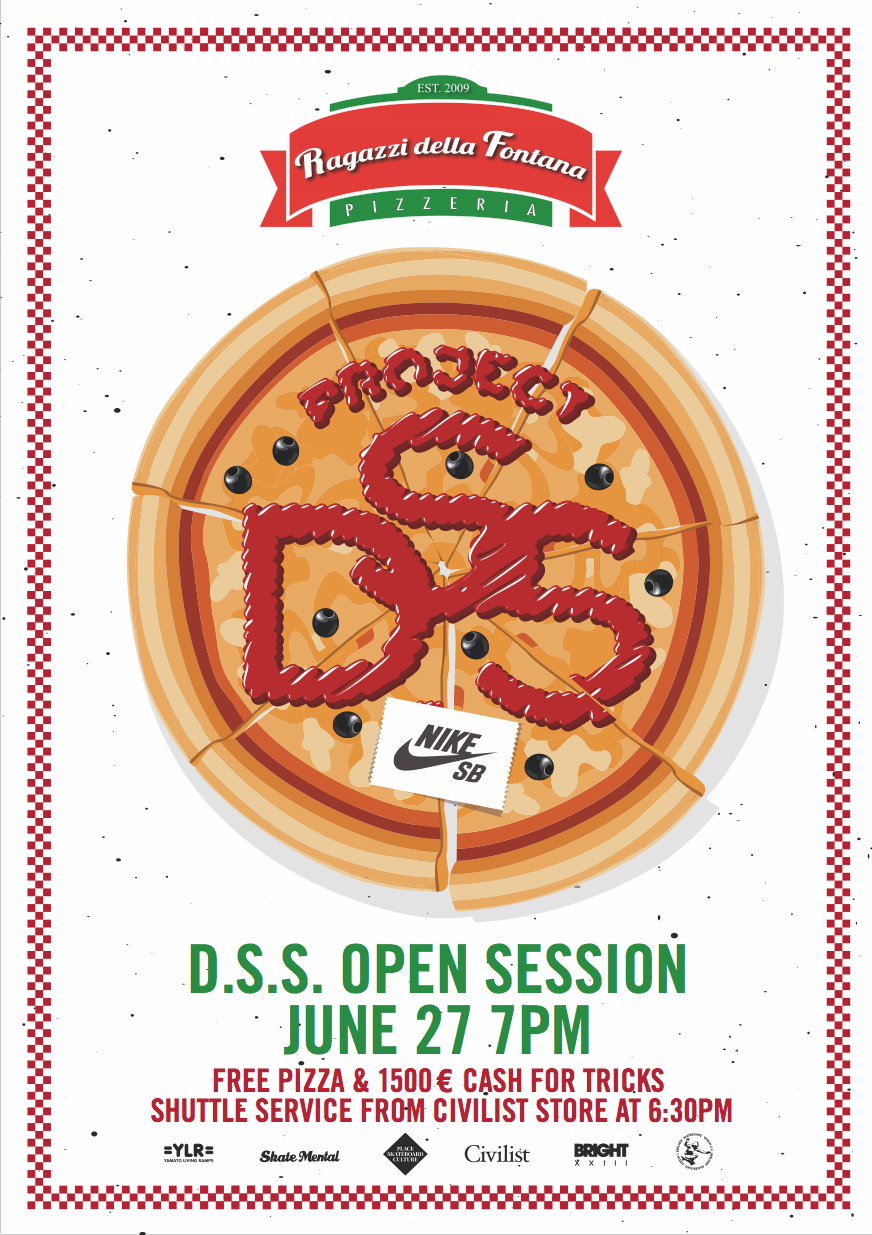 In 2016, we will celebrate the groundbreaking ceremony for the further development of a unique DIY spot in Berlin, The Dog Shit Spot. Legendary skaters Jan Kliewer and Lennie Burmeister will build and regularly install in cooperation with Yamato Living Ramps and 1. Berliner Skateboardverein e.V. new elements (obstacles) over a two year period. These developments will be celebrated with events as the construction progresses.

During the process, Berlin locals will be able to enjoy and participate in the events that will take place at their favorite skate shops in the city. They also will have the opportunity to provide us with their feedback as well as partake in the development of Project DSS. In the end, the decisions about particular plans and obstacles will be decided by votes.

#ProjectDSS is served! After six events of collective preparation we’re super close to finally enjoy the delightful result of all our diligent work. Join us and the Nike SB, Civilist and Skate Mental team at the ceremonial supper at June 27th. Enjoy sessioning some fresh mouth-watering concrete while delicately savoring a hot slice of pizza made by ‘Ragazzi della Fontana’ and getting rewarded by € 1.500 cash for delicious tricks.

The ‘1. Berliner Skateboard e.V.’ and ‘Yamato Living Ramps’ will officially open the venue and pizza oven at 7 PM. If you’re around Civilist you’ll be able to jump on a shuttle bus at 6.30 PM. Buon appetite and see you at the DSS!

Head over to the Facebook event to join us and to keep yourself updated.

Every year with the beginning of summer on June 21st (the longest day), skateboarders all around the globe meet up to celebrate the international Go Skateboarding Day. For this reason, Nike SB once again organized a whole event in Berlin. This year was different because of the Project DSS connection, the day started at a classic spot and ended at what will probably be one of Berlin’s new hotspots for the next years to come! On this day, Polendenkmal was host to the first best line contest and, people definitely went off! Some NBD lines were made with considerable ease and style. After that, we cruised down to eat and skate the DSS. Watch the video and see exactly what the atmosphere was like, who did what and who rolled away with the prize money. 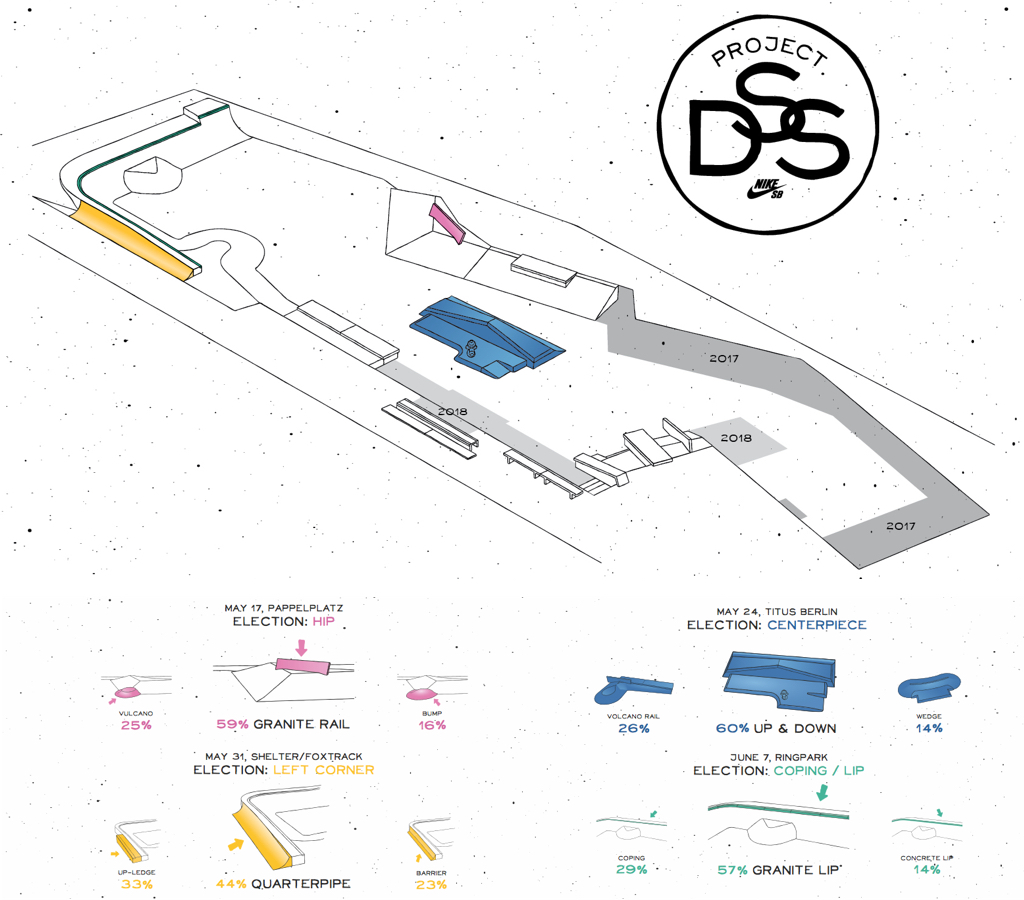