We received a mail this week from our lovely friends from SF with a new edit by the world’s best and most successful skateboard brand “Hostel Verde”. Watch the video, go nuts, and run to your local shop to ask for Hostel Verde product.

Detroit is a city in the state of Michigan, which is a place in the midwest of the United States. At one point in time, a lot of cars were being built there, hence the name “Motor City”. After the decline of the motor industry, the city emptied out but somehow the music scene remained. Just google “Detroit Musicians” and take a moment to scroll through one of the most defining lists of musicians you’ll ever come across. Stevie Wonder, J Dilla, Theo Parrish, Aaliyah, George Clinton, and Eminem just to name a few. The City has some kind of rhythm to it and our friends from Berlin, Hanover & San Francisco felt a lust to bust some moves. 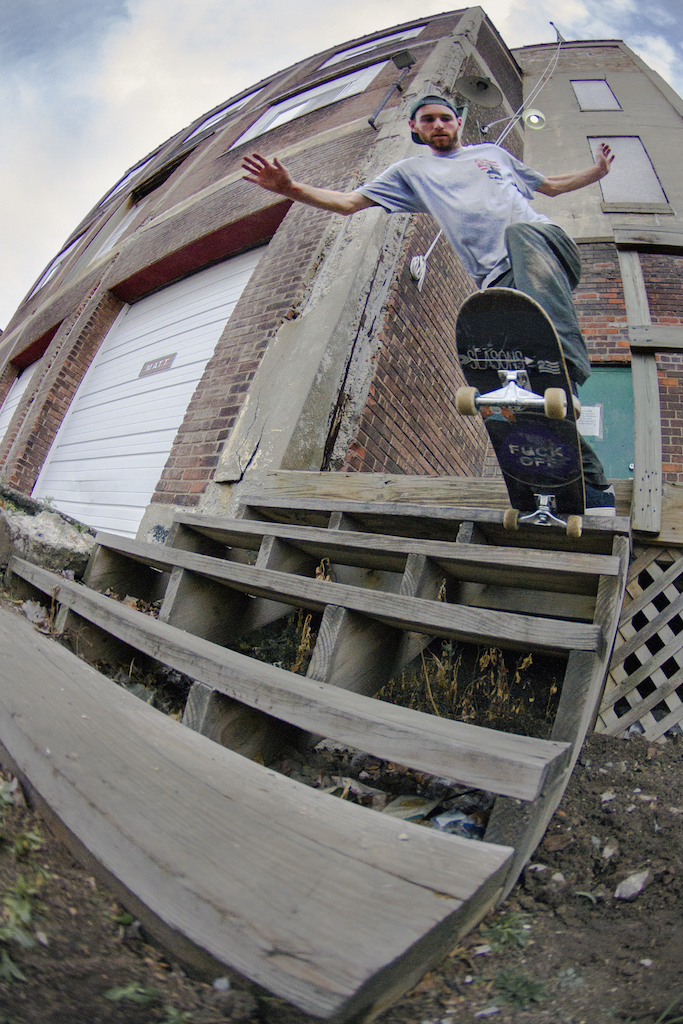 Harrison Hafner is the smart guy, he brought his tools and made sure that nothing would hold him back skating a spot. We can all be proud of Harry that he’s still skating with all the dirt he has stuck in his eyeballs, after all these years of having very dirty hands. BS Tailslide in quite the muddy situation. 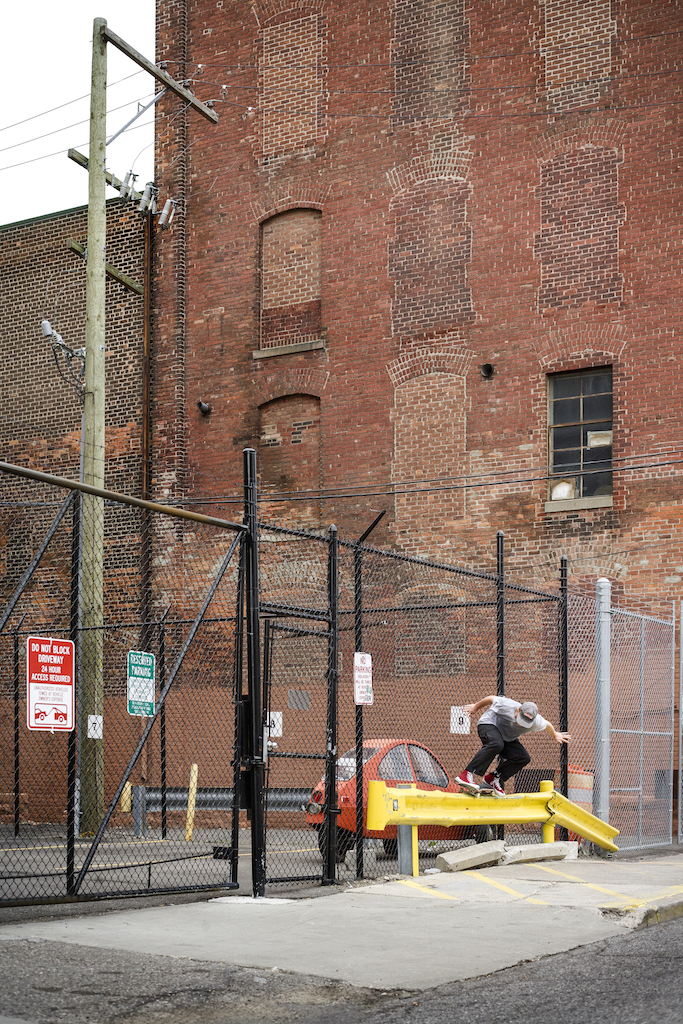 Nils Brauer would never leave the house without his first-aid-kit and the car you see behind the yellow rail would drive immediately to the next hospital in case of an emergency. Shortly after he landed this BS Fifty he got his full body disinfected by a nurse that was coincidentally at the scene. Tragically, she forgot one important thing and to this day, Nils is still struggling with serious side effects of touching the fence with that one hand that didn’t get the cleaning treatment. Get well soon, Buddy. 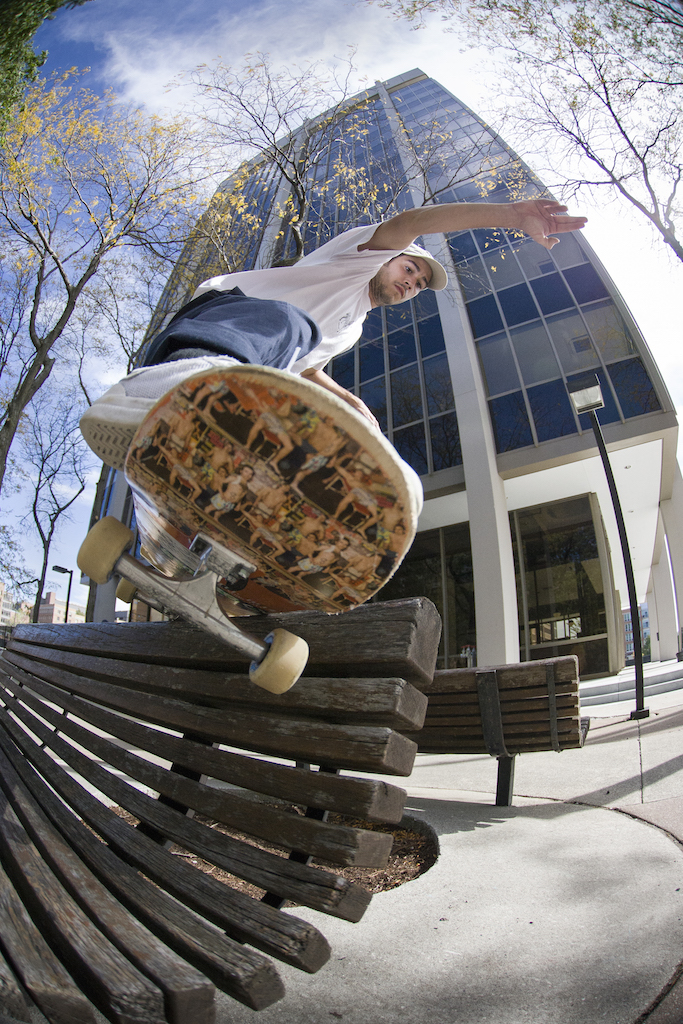 Alex O’Donahoe is a weird name but then again he is a weird guy. But in a very good way. He believes in conspiracy theories and eats quite a lot of Spaghetti. He regrets grinding that bench and actually going for the BS Feeble Grind wasn’t such a good idea either, “It’s just a lot of information for the government to have against me..” – he said.  If you count all the windows of that building behind Ayo and do the analogy to the 9/11 case you might get some answers that will totally leave you shocked. 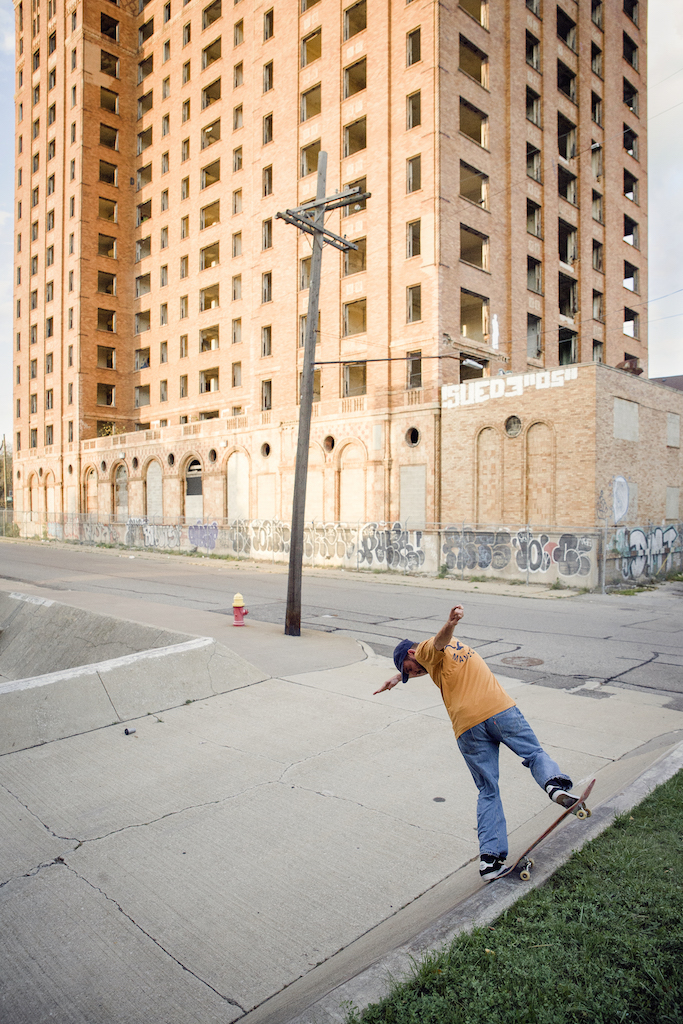 Get the NEW ISSUE 62 to see more about the “Mom’s Spaghetti” tour.

This week saw the release of Brett Nichols newest video called SPÄTI and for those that know us know that we were closely involved in the making of that video (on the skateboarding end of things). After his 2015 visit, we stayed in touch with Brett and some of the other American guys even made a return visit in 2016. That summer spent skating and sitting at the Späti drinking beer resulted in multiple projects happening,  A plethora of pictures shot by Alexey Lapin, Friedjof Feye and Danny Sommerfeld a lot of social media output and even projects like Pete’s B’n’B in Amsterdam are connected to this visit. Coming back, those weeks spent cycling, skating and drinking resulted in multiple stories which will be unfolded in this article.

Traveling the through city.

Picture this, Berlin 2015, every summer year guest flock to our city to experience life as it is lived in the German capital. Back in 2015 the summer marked the return visit of a couple of our friends from the USA coupled with the visit of Russian skate photographer Alexey Lapin and German photographer/skater Conny Mirbach. From the start, everybody got along great and skate dates were made, “Let’s go out and shoot some photos and film some stuff, motivation was high. Now normally skate photographers travel with a lot of equipment and that often means that you are bound by a car, but Alexey traveled very light. It was in fact, Brett Nichols the filmer who carried two boards, multiple VX1000 cameras, wax and all sorts of other tools. He had everything, from stuff to smoothen out the most un-grindable ledge to stuff that could fix the worst run up. The best way to find stuff to skate in Berlin is to travel the city by bicycle, which meant that Brett had to carry a lot of stuff, which he did without ever complaining! I… did complain though. When you are out looking for spots you don’t always know what you are going to get, so that meant for me that I didn’t get to skate that much being that the spots didn’t favour me and that, to be honest made me feel quite sour. Like on the day that Tjark did this wallie 180, you can see me in the background anxiously waiting for him to land it so we could leave.

As you can see in the video TJ wasn’t quite done after he landed this one, I was.

Changing up your style.

For those of you that don’t know, not every American uses a bike to travel to where they need to go. So cycling around for days on end definitely caused some sore asses, stiff leg muscles, and the occasional back ache. But that wasn’t the only thing that happened as a result of the hours spent on a bike, seeing that a lot of spots were ‘hit and run’ type of spots Bobby Groves developed a thing where he wouldn’t even take his pants out of his socks (A thing you do so you don’t get grease on your pants.), instead he just skated adopted a new style of dress and rocked the shit out of it for a week or so.

Bobby made this one look easy but it is probably the sickest trick in the video.

Not being able to Ollie

Brett wouldn’t skate that much, he carefully choose the spots he wanted to skate and what he wanted to skate seemed to never involve him having to Ollie, I asked him about this and he replied that his body sort of denied him the ability so he tried to find other ways to get his skateboard-fix. As a result, Mr. Nichols would skate somewhat weird spots, things that others wouldn’t necessarily want to skate. His taste came not only from the fact that he wasn’t able to Ollie it also came from his surroundings. He had a thing for spots that looked like they were built in a certain era and in a certain style. This made Brett interesting to watch, his eyes would wonder during our long cycle tours and if he found the right thing he would battle until he got what he wanted.

This is probably my favorite trick in the video and it is near my house and somehow I never identified this sculpture as a spot.

Brett is pretty meticulous about how he want things to look and he doen’t hesitate create the right easthetic.

This is the first spot I saw Brett skate, he battled for the trick quite a bit but got what he wanted in the end.

All in all, we skated a lot of new spots and Brett was open to film whatever you wanted to try, culminating in us skating some spots that had not seen a lot or maybe any skating at all. Ever since Dane Brady’s Polar part people seem to be into skating alternative surfaces more and more but during this trip, we tried to skate some seldomly skated spots in ways we hadn’t seen them skated before. One of the many things that made the whole experience so much fun, every day we had a routine, meet up at the local skate park, skate, Alexey would drink a beer and then we would get on our bikes and skate the whole day. Brett took his time with the edit but in the end, he captured the fun quite well, making it seem like one of the most fun summers I ever had, and maybe it was.

Nils holding on to his crooked grind, I remember watching this and thinking “I didn’t know Nils could do that!”, a common thought for those familiar with his skating.

Brett originally asked me to do something on this but I was too heavy and couldn’t roll away, Malte could and did this first try.

Harry connected us all so it is only logical that we close the whole thing out with him.

“Späti (pronounced shpi-tee) is a shorthand for a German corner store. It was the most common word spoken by my new German friends Nils Brauer, Daniel Pannemann, Tjark Thielker, and so many others. Between every spot a debate would be sparked as to where the nearest späti was and whether it was in the direction we needed to go. The späti serves as both the snackbar and the regular bar – unlike The States, you are free to sample adult beverages right outside.” – Brett Nichols