Another one from Berlin! After Leon’s video from last week, Sergio Ben Mario now released his new Berlin-based video through our friends over at Pocket Skate Mag. It features a lot of friends and familiar faces from Berlin and we are stoked to finally see what they have been up to!

Our good friend Leon Moss dropped this video out of nowhere and it blew us away. He told us since he started to film for various brands and saved clips for possible future projects, he never ended up continuing to make his own videos after his “So Silly” video. A lot of footage piled up on his hard drive, so instead of letting those clips get dustier and dustier, he decided to edit this video. We had no idea he had so much up his sleeve. Amazing work Leon! We can´t wait for the next one!

Make sure to go back and rewatch Leon’s previous edits HERE. 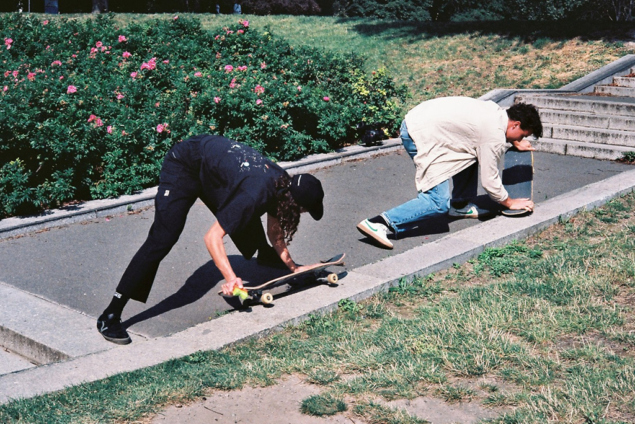 It is no secret that skateboard media is mostly run by people like me, a “Cisgender-white-human-male” now that in itself...
Read On 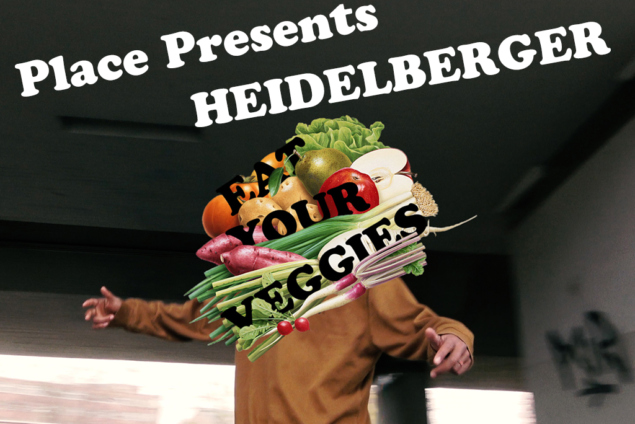 We could start this text the same way the last Bronze Radio started, and like the NYC-based radio station, we...
Read On

The day started with a video from Berlin and it is ending with one. Independent Trucks sent their European team to our lovely home town of choice.

Sergio Ben Mario was out in the streets of Berlin for while to make this video happen. A lot of your favorite skaters from Berlin are in the edit such as Kalle Wiehn, Julian Ruhe, Kaio and even Danny & Peter, just to name a few because the list goes on and on.

This is a big thing for the Vans German team and with a person like Max Pack at the helm, you know you are going to get some good shit. But what about the behind-the-scenes? Leon Moss did a lot of the heavy lifting in Berlin. So we turned to some of the riders and asked them to turn on their friends, unfortunately, most of them remained cordial 🙁

Leon Moss tells all about his friends

Hirschi has been on Hitachi-airlines since the first fusion festival in 1997. Frequent flyer miles because he keeps blasting airs!

Julian Ruhe’s allergy-collection is bigger than his bag of tricks.

Kalle Salzburg is so German that he named his dog after a German potato dish.

You had some surprising tricks in this video, did your move from Emerica to Vans open up your bag of tricks?

The Switch Frontside 360 I had done before years ago. I did one Marocco over a hubba, and it just fit. but yeah, I don’t do that trick that often, I keep forgetting about it (laughs).

The Pole-Jam Pressure Flip was another surprising one!

That one just just happened. I sort of flipped like that on some of the shove it tries. I did a shitty Pole-Jam Shove-It and ended up going back for a better one. I landed the shove one fast, and figured out that if I put my foot in the pressure flip position before I pole jam that I could flip it. Once I figured that out I rode away a few tries later.

You went on a trip with Vans to Hamburg, who surprised you the most on that trip?

Schianta (Daniel Lepori)! He is so quiet, so nice but all of a sudden he will just bust out something crazy!

What about Max Pack, how is he as a TM?

Max Pack, is the best TM and a good soul!

Similarities are more easy to find that the differences, they both inject beer into the session and make it fun.

Who is your favorite team mate?

Julian Ruhe or Joscha “Bonez” Aicher but I don’t see him as often especially since he moved to Barca! To be honest Julian really needs a raise in pay, he has been ripping so hard lately (laughs)!

Leon is always motivated to get a clip and won’t ever give you the feeling that you’re taking too long to get the trick!
He also has a very strong opinion on which trick could look cool on which spot, and he isn’t shy, he will give you that extra creative input as well!
He seems to know exactly what trick each skater could or should do at the spot, he definitely has a vision.
Thank You, Coach!

I don’t know what to say except that when we are together people say: “Oh I didn’t know he was your brother” (laughs)!

Max Pack a.k.a. Max Zapf is one of my best homies. We traveled and skated many spots in many different countries. I would like to say that we pushed each other to become better. The difference being, he focussed on filming and I focussed on skating! It is great that we both ended up over at Vans. Even though we only really see each other on tour, we still talk just about every day and our friendship remains a deep one. I am really happy about all that he accomplished and support him to the fullest, I know he poured his heart into it! The only thing he has to learn is how to drink for real!

Some would say it was bad luck and some would say that it was meant to be this way. Here is an explanation by Dan himself why the new video is called unfinished:

“Due to harddrive issues in the past, a lot of the corresponding footage got lost. This is the fragment of THE UNFINISHED VIDEO from 2017.” 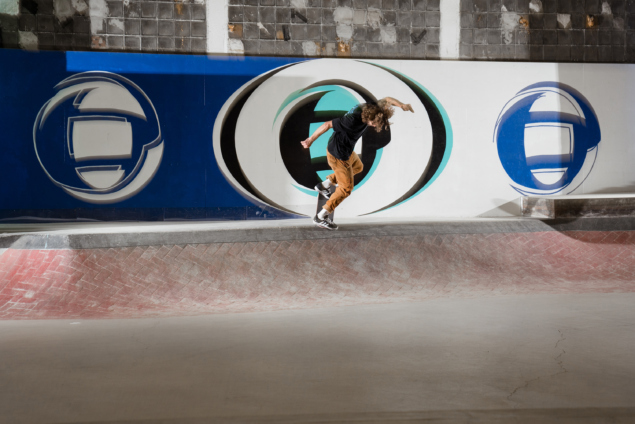 Like all sport & cultural sites, we are heavily affected by soft lockdown but we want Skatehalle Berlin to “feel like a home” for everyone.
Read On

So, a little earlier this month Nike hosted a day where the Skatehalle Berlin was opened up to the public and as you have come to expect from us we were there to show you, the public, what went down. A video recap is something we do quite often but because this was a special event we chose a different route, we chose you, the skaters, to document the event for us.

What was so special about this event? Well, it was part of the new “Just Do It” campaign which focusses on getting skaters skating, skaters talking and mainly skaters just being active, together.

Besides that, two local skaters are part of the campaign, Melika & Mobina Nazari, two girls who came to Berlin from Afganistan and are now a strong fixture in the Berlin skate scene. They became a part of skating through workshops and now they took the role of giving them, a proud moment.

Furthermore, we also gathered to session the Bowl in the Skatehalle. A bowl that has been there for the longest and is worth celebrating but is also worth updating and with people like Fernando Bramsmark, Farid Ulrich & David Bachl it is easy to see why an update is needed to raise the stakes.

So in the end, a temporary extension was brought in and Nando rang the bell which signaled a new day for the transition part of the Skatehalle. Now press play and see people race, fly, skate, DJ but most of all enjoy themselves.

Vincent Heller did a really great job making Hack3 even better than Hack Hack! The skating, editing and overall vibe all had an update and it did the project well.

For those of you that might have thought it ended here, think again, trust us when we say there is more Hack coming!

Every year, during the winter months skaters in Berlin need to find a sheltered home to skate. Snow, hail, wind, rain and -15 temperatures will make even the most hardened skater go looking for an indoor location.

Some go to public parks others like to get creative and sneak in somewhere warm. This “spot” is definitely the creative kind of location and with Valle Rosomako as the gatekeeper, you are assured that things will be fun and surprising.

“I can’t take it. It’s January now and I’m losing my mind over here.” Probably driven by the same search for activity during lousy winter days Dan Schulz, the mastermind behind one the most significant Berlin Skatevideos of recent years OH SNAP, brings a documentary to the screen that deals with exactly this very topic. It reveals the ambivalence of having the winter season, while taking a look on it’s pros and cons. Experience it with and through the eyes of Paul Otvos.

Necsessity is the mother of ingenuity. Thus, during the harsh wintertime in Berlin a part of the Iriedaily warehouse got transformed into a wonderful DIY indoor park. I suggest you better become friends with Valle Rosomako and if you are lucky he probably invites you for the next after work sesh, too.

Finally, Dan Schulz’s Berlin based independent skate film Oh Snap is going to be premiered on December 3rd. Here is the official trailer, which provides a good foretaste of what is to come! Oh Snap! 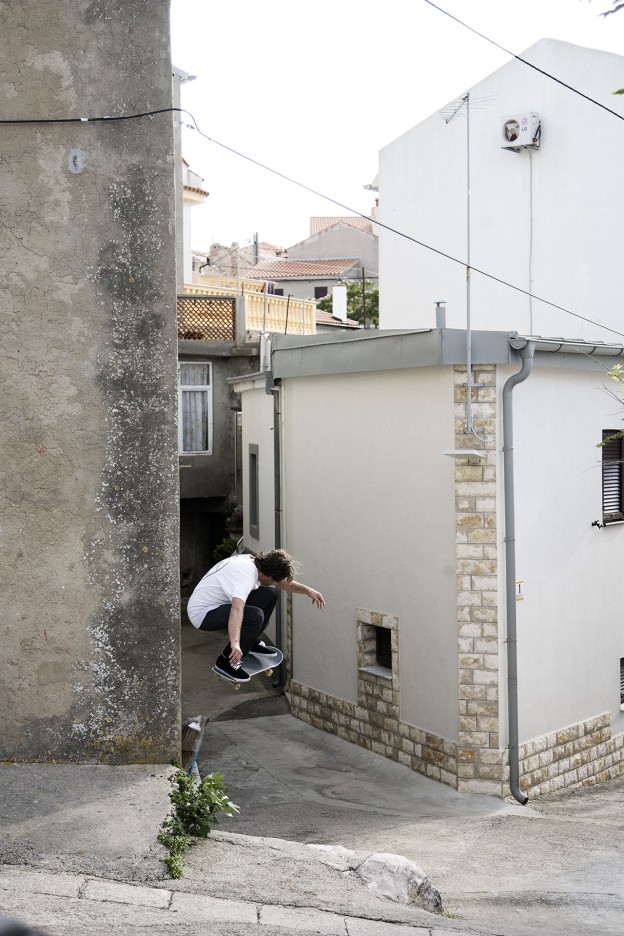 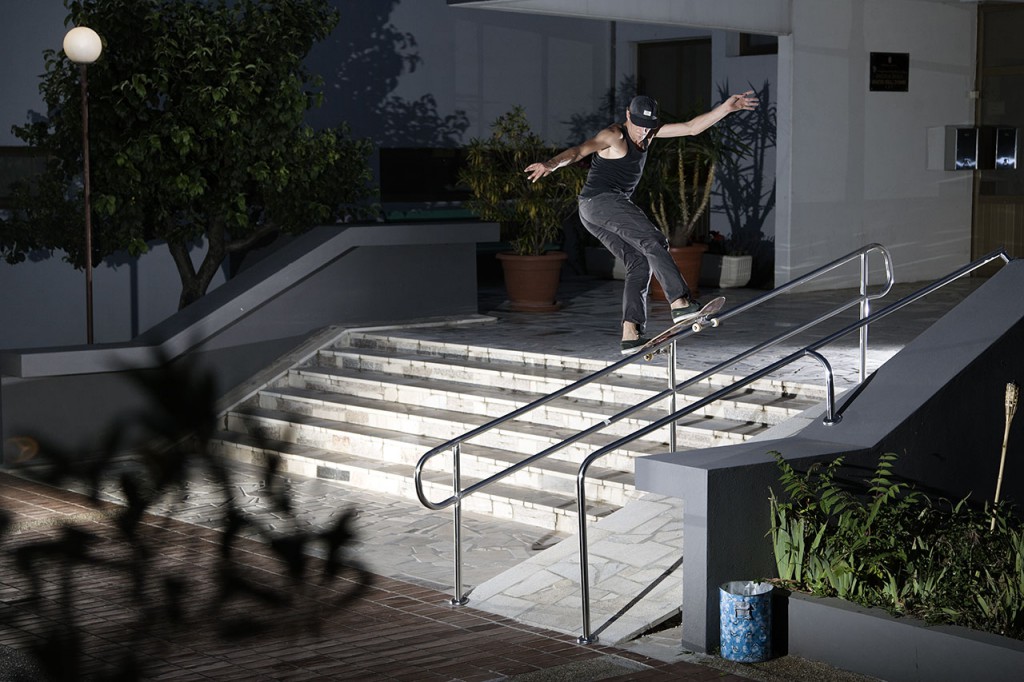 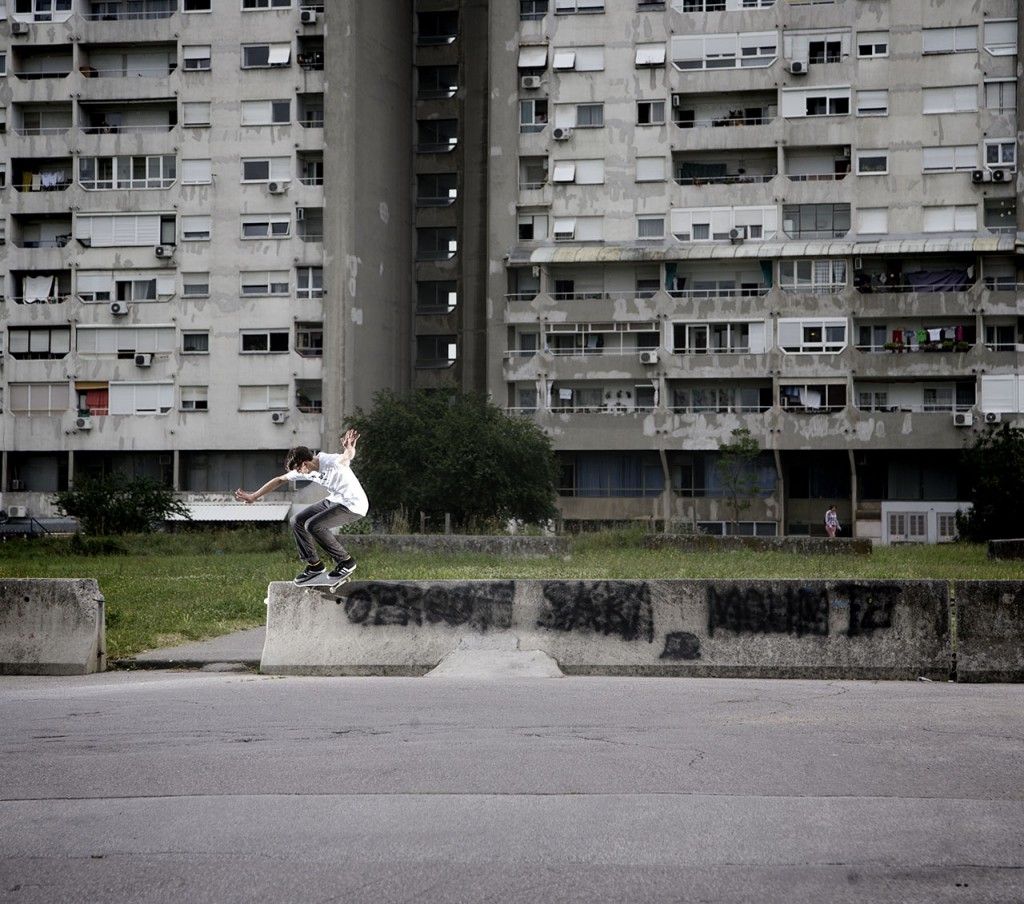 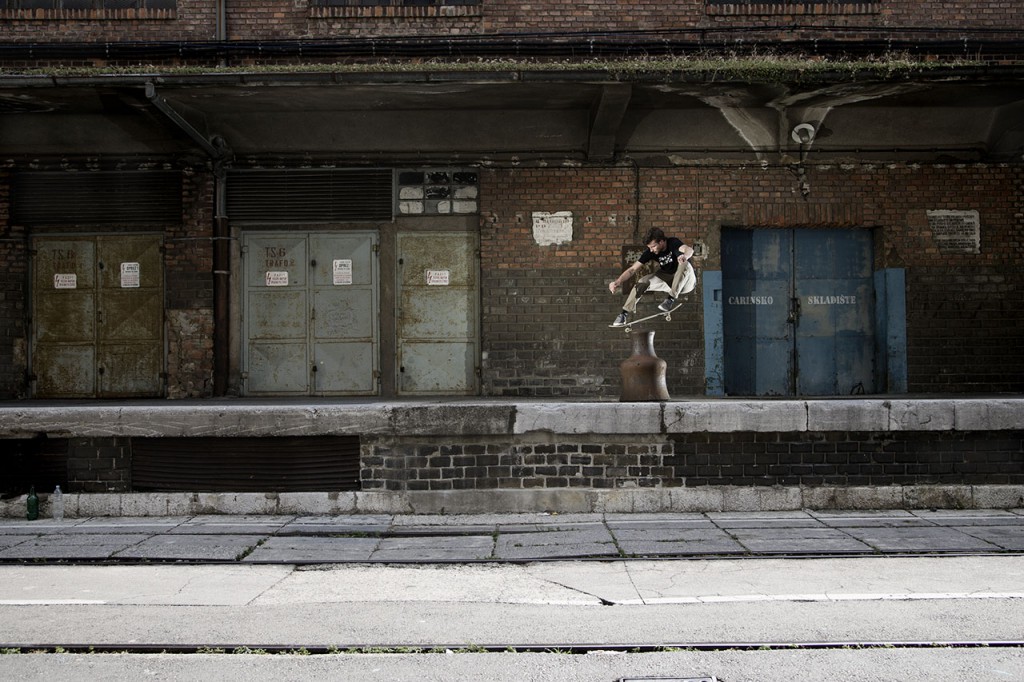 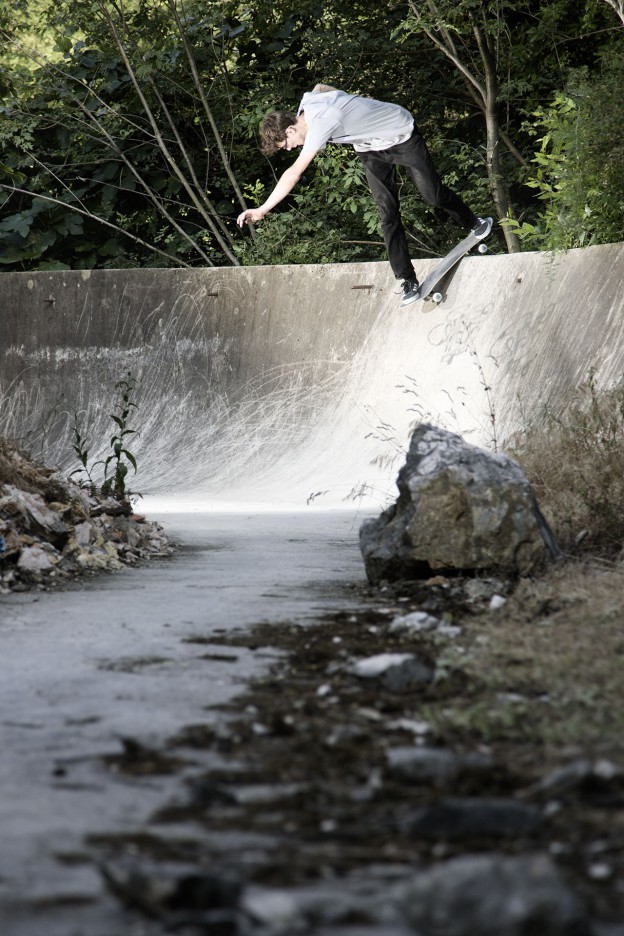